It's not so very often that you come across a book that offers keenly observed characters, a forensic analysis of the rise of wealth among the banking classes, a commentary on immigration from the point of view of a variety of immigrants, an insight into the worlds of football and contemporary art and much more besides - and does it all with lashings of warmth and humour. Capital, by John Lanchester, is all of that - and it's lovely and long (well, it would be, to offer all that) - so you can really sink into it. The humour reminds me a bit of J G Farrell's The Siege of Krishnapur, and the range and readability call to mind Vikram Seth's A Suitable Boy. 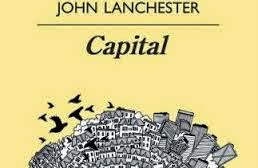 It tells the story of a number of the inhabitants of Pepys Street, a road in London with houses originally built for lower middle class Victorians, but now available only to those with at least a million to spare. In the first few pages there is a brief history of the road and its fortunes which serves as the most concise history I've yet seen as to to how the property market in London has got into its present absurd state, where it must be almost impossible for anyone doing an ordinary job to get onto the ladder. (NB I don't live in London, but I know people who do!)

One of the first people we meet is Roger Yount, a high-earning but not terribly competent banker, with a wife, Arabella, whose chief occupation and obsession is spending money. Along the road is Petunia Lowe, the only inhabitant of the street who has lived there all her life: a sweet old lady with an exuberant garden and a house stuck in a fifties time-warp. Then there are the Kamals, who run the corner shop: three brothers, the eldest of whom has a wife and two children. They live in dread of their mother coming to visit from Lahore - but actually, when she turns up this time she puts her stubborn, cantankerous, manipulative nature to excellent use when she defends her middle son from a ridiculous terrorism charge. Another of the houses is owned by a football executive, but lived in at the moment by his club's newest signing, an incredibly talented seventeen-year-old from Senegal called Freddy - and his father, who is determined to support his son but longs desperately for his home, his wife and daughters, and is bewildered by the British climate, food and language.

Then there are the associated characters: a Polish builder called Zbigniew; a beautiful Hungarian nanny called Matya; Petunia's grandson, Smitty, a very savvy artist; Quentina, traffic warden and courageous illegal migrant from Zimbabwe - and oh, so many more. I wouldn't say all human life is here, but there's certainly a good cross-section of all London life.

The inhabitants of Pepys Road have something else in common apart from sharing the same post code; they have all recently started receiving mysterious postcards, bearing the motto: I want what you have, and photographs of their front doors. The campaign escalates - but this isn't a story about a crazed criminal or a serial killer or blackmailer: it's much more subtle than that, having to do with the more ubiquitous quirks of human nature.

This is a book about ordinary lives, but it has immense scope. It says a lot about the state of the UK today, but it also says a great deal about life, death, morality and struggle. And it makes you laugh. Marvellous!

I know the friend who recommended it seldom ventures into the world-wide web, so probably won't see this - but all the same: thanks, Steve.
Posted by Sue Purkiss at 10:28:00 2 comments: 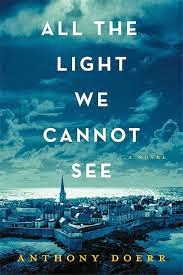 Just heard that Anthony Doerr has won the Pulitzer Prize for All The Light We Cannot See, which I wrote about here. It's a marvellous book - beautifully written, and so cleverly constructed. Many congratulations to him!
Posted by Sue Purkiss at 10:15:00 No comments:


The book I'm going to write about today is a bit of an oddity. Well, it's not an oddity - the odd thing is that I'm writing about it. Usually, if I'm not enthusiastic about a book, I don't review it. But with this one, I'm interested to explore why I have reservations - and also, the writer is so successful I'm sure he won't even notice me bleating away on the margins.

He's Anthony Horowitz, creator of the very successful Stormbreaker and Alex Rider series, the Sherlock Holmes sequel House of Silk, the very likeable TV series Foyle's War, and much more besides. I was sent this book, Granny, by its publishers, Walker.

It's always nice to be sent books to review, but I was a little puzzled by the arrival of this one. It first
came out in 1994, for one thing (though this is a new edition, with illustrations by Tony Ross). For another - Horowitz is an immensely successful author. Wouldn't it be better to seek out reviews for some of the less well-known but equally excellent writers in the publisher's stable?

But I was pleased anyway - I have an eight year-old grandson; perfect, I thought. We can read it together and chortle over the antics of this fictional granny. However, I thought I'd just take a look first.

Well... obviously, I'm biased. I am a granny, no getting away from it. But... this, from the introduction?

Grannies aren't the same as grandmothers. For a start, they don't even have to be women. They are just old, very unpleasant and seem to cast a shadow that stretches out long before they enter the house...

Here Horowitz tells us he's writing about his own grandmother. And he tells us that there's quite a lot more in the book which is based on his own childhood. It's rather sad - at the end of the introduction, he says:

All I can say is that I hope you enjoyed reading it more than I enjoyed living it. In all honesty, that shouldn't be too hard.

Well, what happens? Joe Warden is twelve. He lives with his parents, who are not very interested in or good at being parents. But they pale into insignificance beside his granny. Here's a flavour of her:

... worst of all was her skin. As well as kissing her grandson, Granny insisted on his kissing her and her skin was as withery as a puctured balloon. No words could describe the feel of her skin against hislips, actually flapping slightly between the upper and the lower lip at the moment of kissing...

But she's not just disgusting - she's evil. She has a scheme for regaining the youth of herself and a legion of other equally revolting grannies. It involves the sacrifice of a young life - Joe's, of course. So she isolates him, ruthlessly getting rid of any adult who tries to help him - a sympathetic gardener, for instance, is blown to smithereens when he lights his bonfire. So Joe is completely alone, and frighteningly vulnerable.

...did he have any life of his own? No! His every movement was controlled and organized by adults with less imagination than him. His parents, the teachers at his posh prep school they were all the same, passing him around as if he were no more than a tin of sweets.

There's a lot about the story - adults who are disgusting/villainous/uncaring, an isolated child who has to rely on his own ingenuity to win through, a set piece where the hero is in terrible jeopardy - which is very like Roald Dahl. It's well-written, the story rockets along, and you can see it's meant to be funny. There are funny bits, but overall, and I suspect unintentionally, it seems to me to be quite a sad book.

In Dahl's stories, there's a warmth and exuberance that somehow makes the horrific Twits not frightening so much as funny. (Though The Witches is certainly pretty scary...)The main character has you rooting for him/her, because s/he is generous and brave and put-upon. Usually there are other characters too who help him/her, and their goodness counteracts the villain's badness. Bad things happen, but the overall feeling is that goodness will, in the end, defeat badness. And there's an element of magic or fantasy which tells us that this isn't the real world - so it's safe to read about it.

But with Granny, I'm not sure that that safety net is there. Joe and his parents get away - far away - but the last sentence makes it clear that they've probably not gone far enough; Granny is on their trail. And there's a sadness at the heart of it; something disturbing. Probably that relates to Horowitz's feelings about his own childhood, going by what he says in the introduction.

Then again, though, maybe I'm just reacting to it in this way because I am a granny, and this is certainly not a book in praise of grannies. But... well, I'd advise reading it first, certainly before giving it to an anxious child. There could be bad dreams.But no doubt there also are lots of resilient children out there who would love it.