I was given this book recently by my son, who had just been on a course at Moniack Mhor where Janet Paisley was one of the tutors. I had never heard of her before - and I'm seriously wondering why: because this book - published some years ago in 2007 - is hugely enjoyable and satisfying on a number of levels. Why hasn't it been all over the bookshops? Or perhaps it has, and I just missed it? It's a sad thought that so
many books come out nowadays that it's very easy for even really good books to get lost.

Or is it because it centres on Scotland, and hasn't made it south of the border? I hope this isn't the case. I don't see why it should be, but I suppose it's possible. 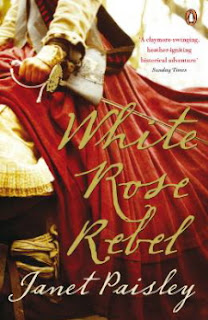 Anyway, whatever. It's a very, very good book. At the centre of it is the charismatic Anne Farquharson -also known as Colonel Anne, la belle rebelle, and many other more or less complimentary things - who played a significant part in the 1745 Jacobite rebellion, when Bonnie Prince Charlie sought to gain not only the Scottish throne, but also the English one. She loves and is loved by Angus MacGillivray, but she also loves - and marries - the equally charismatic Aeneas McIntosh. For a short time the marriage is everything it could be, but as the rising gathers force, Aeneas and Anne find themselves on different sides. Anne is for the Prince. At first she is carried away by the romance and the rightness of his cause, and by the longing for her country to be free of the English yoke; but as time goes on, she begins to see that Charles does not have the character and stature which his country needs. By then, though, it is too late; the tides of war are rolling inexorably towards Culloden.

I only knew the bare bones of this part of Scottish history before I read this book. But I have been to Culloden. I'm not normally, I think, particularly sensitive to the atmosphere which some people sense in places; I've never felt the presence of ghosts, let alone seen one. But Culloden is a desolate place, with a brooding sense of melancholy. How could it be otherwise, when so many were brutally slaughtered here, and so many hopes died?

This book explains what led up to the battle. But it also reveals a society where women were at least the equal of men, and where a culture had been created which ensured that everyone within a community was cared for: the clan chief was responsible for his people and cared for them; he held the land for the good of all, not on his own behalf. After Culloden, all that was changed.

So - the book is a terrific, page-turning read. The characters are complex, larger than life perhaps, but immensely attractive. There's a lot of humour in it. The battle scenes are horrific, but all the more convincing for that. There's quite a lot of rompery between the sheets - which Janet Paisley writes about so much better than Ken Follett. (See review of the latter here.)

But above and beyond all this, the book makes you think about a different sort of society that might once have been possible - and about all that was crushed and lost at and after Culloden. And it makes you understand a bit better why many Scots feel as they do about nationalism.

Nicola and Val and hiding behind the sofa

Recently, a friend sent me a link to a recording of an Edinburgh Festival event - Nicola Sturgeon, the leader of the Scottish Nationalist Party, interviewing Val McDermid, the famous Scottish writer of detective novels. Somehow or other, despite my enthusiasm for the detective genre, I'd never read one of her books, but I thought it sounded an interesting combination so I had a bit of a watch. 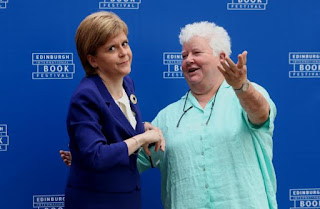 The two are both complex characters: attractive, intelligent, talented and troubled. Mind you, it's not surprising they're troubled, considering all the things Val McDermid puts them through. Not only do they track down serial killers, but they not infrequently become victims, or at least collateral damage themselves: there are some very grisly descriptions, and if I could have read the books from behind the sofa, believe me, I would have. (Incidentally, I wonder what Dr Tony Hill would say about the psychology of people who read books about such terrible things? I worry about that, I really do...)

The plotting is brilliant, and the can't-put-down factor is off the scale. But, as in so many of the best detective series, it's the developing relationship between the two hunters which is the really riveting factor - and it's this which, for me at any rate, makes me want to keep reading the series - though the insight into the mysteries of the criminal mind also grips. Incidentally, the series was televised under the title of Wire In The Blood, with Hermione Norris and Robson Green, but I missed that too.

The first book in the series is called The Mermaids Singing, and here is a link to the interview. (But apologies to readers outside the UK; I don't think you'll be able to see it.)

So what is it that makes the Tudor period so endlessly fascinating to writers? Well... passion, treachery, adventure, a turbulent political climate, beautiful (albeit probably uncomfortable) clothes, larger-than-life characters, royalty, Shakespeare... Hm. Yes, it does seem to have one or two things going for it - and Elizabeth Fremantle's new book taps into most of them.

But above all, it has two fascinating characters at its heart - as well as a number of others on the periphery. The 'lady' of the title is Lady Penelope Devereux, the sister of one of Elizabeth's favourites - the Earl of Essex - and the stepdaughter of another, the Earl of Leicester. The title comes from a piece of advice given by Lord Burghley, Elizabeth's trusted adviser, to his son, Robert Cecil, who is the other viewpoint character in the book. Burghley and Cecil are both aware that Penelope is not only beautiful; she is also highly intelligent, politically astute, and the driving force of her flamboyant 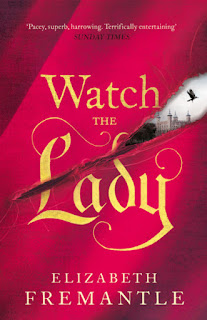 family. Burghley sees her ability and advises his son to watch her. Cecil sees her ability too, but he's also very aware of her beauty. There's poignancy here, because Cecil is crooked, not beautiful at all. The first time he sees her, she smiles at him - a smile that 'would light up the shadows of hell'. Usually, girls look at him with 'disgust'. As a result, though he will always be an enemy of her brother, his feelings for her are ambivalent - and in the end, this helps her to survive in the dangerous world of Tudor politics.

Penelope is a passionate character. When she is very young, she falls in love with Sir Philip Sidney, the perfect knight: brave, loyal, chivalrous, learned. He falls for her too, but her marriage is a matter of political and economic expedience; she is obliged by her family to wed Lord Richard Rich - they need his wealth, and he needs their ancient lineage. The marriage is not a success, but Penelope is a pragmatist and she makes the best of it - and finds that she is able to turn the situation to her advantage: she takes charge.

Her brother, handsome, charming, ambitious, becomes to the Queen the son she has never had. But along with all his good qualities, Essex is also headstrong and erratic; he suffers from mood swings which leave him sometimes plunged into despair and sometimes dangerously out of control. Penelope is the rock of her family; her mother, who lost the Queen's favour when she married Leicester, is foolish, and her sister wants a quiet life, away from the temptations and dangers of court. It is up to Penelope to improve the fortunes of the Devereux clan - but she also wants personal fulfillment; she wants love.

Elizabeth Fremantle weaves a richly coloured tale of Elizabeth's court. Naturally, as a novelist she takes leave to use poetic license - in Richard Rich's proclivities, for example, but also in a delightful scene where she imagines how Shakespeare might have come to compose his famous sonnet: My mistress' eyes are nothing like the sun... She reveals the complex machinations and manouevring for place and power, and she shows how Tudor realpolitik is merciless in its sacrifice of the innocent - I could hardly bear to read about the fate of a certain character, whose name I won't reveal. It's always interesting to see how novelists deal with characters who have become well-known to us through other novels and history books; Penelope Devereux is not widely known, but many of the others are very familiar. Elizabeth herself  emerges, at this later stage of her life, as an unlikeable but also rather pitiable figure: Cecil evokes pity and revulsion in roughly equal measure.

But the heart of the novel is the character of Penelope - warm, clever, courageous and loyal. It's a delight to keep her company as she plunges into the intrigues of Elizabeth's court, and yet somehow manages to retain her integrity throughout.
Posted by Sue Purkiss at 03:00:00 2 comments: