The Century Trilogy, by Ken Follett

First up, apologies for not having posted for such a long time. It's been a busy few weeks - particularly the bit where we had two nine year olds to stay! - with not much time or head-space for writing blogs.

But of course, I've still been reading. In fact, I've just finished an enormous trilogy by Ken Follett, and that's what I want to have a bit of a think about today. I say 'enormous' advisedly - I actually started with the third book, because someone had lent it to us - and it's two and a half inches thick, and big with it! I went on to read the previous two on my Kindle, so am not sure if they're as long. Reading the trilogy this way reminded me of the advantages and disadvantages of reading an e-book; it's much, much easier on the wrists, but it's frustratingly difficult to look back and check who this or that character is, and how they're related to the others.


And there are a lot of characters. The trilogy follows the fortunes of five families through the twentieth century; there's the Williams family from the Welsh pit valleys, and their nemeses/neighbours/bosses, the Fitzherberts; the Peshkovs, who start off in Russia and spread to America; the Dewars, American aristocracy; and the Francks/Ulrichts, from Germany. Hm - not sure if that adds up to five: the families spread and mutate, so if you don't pay attention it can easily get a little confusing.

What Follett does is to use the fortunes of these families as a vehicle for nothing less than relating the entire history of the tumultuous twentieth century. So in the first book, Fall of Giants, he covers the Russian Revolution, the First World War and the Depression. The second, Winter of the World, covers the Second World War, the Spanish Civil War and the beginning of the Cold War, while the third, Edge of Eternity, deals with life in East Germany, the Civil Rights movement in America, Vietnam, the Cuban Missile Crisis, Watergate - and rock and roll.

Astonishingly, one or other of these five families is present at every single significant event. Assassination of Martin Luther King? Check. Assassination of Jack Kennedy, and then of his brother Jack? Check. The party at which Stalin is given the news of the Hiroshima bomb? Check. The moment when the Japanese planes swoop down over Pearl Harbour? Check... and so on.

On the one hand, it gets to be a bit difficult to swallow. But on the other hand, it's a very clever way to give the 'inside story' as to how all these things came to happen, and what their ramifications were to be. I have a far better idea now about, for instance, how the Berlin Wall came to be built - and why it was eventually allowed to disintegrate; how President Kennedy's policies on Vietnam, Civil Rights, and the economy were all tied together with his political struggles; and more broadly, about the nature, scope and drawbacks of the huge political movements of the twentieth century.

Follett does all this very well; I'm in absolute awe of how he manages to keep this vast, sprawling subject matter under control - and to cover so much, and with such clarity. He is also a very good story teller; he keeps you turning the pages, because you want to know what's going to happen next - both to the characters, and on the wider world stage. (And of course you know roughly what's going to happen on that wider stage, so there's also the interest in how he's going to link it all in.)

I don't think he's so good at character. His people are not two-dimensional; he's much better than that. They aren't just sketched in - but they're not fully drawn and painted either. Their function is to be in the right place at the right time, with the characteristics that will be necessary to make them act in the required way to bring about the desired result.

I have one more quibble. The sex scenes. There are a lot of them, they're described in excruciating detail - and they're all almost exactly the same. And do they add anything to the story? Others may feel differently, but on the whole, I think not!

But to sum up - the trilogy is very readable, incredibly informative, and an astonishing achievement. If you like to learn about history through fiction - as I do - it certainly deserves a place on your shelves. (Or if you or your shelves are feeling a little weak, on your Kindle or other ebook.)
Posted by Sue Purkiss at 13:04:00 No comments:

'Of shoes and ships and sealing wax...'

Actually this post is about none of the things in the title - but like the Walrus's list of conversational topics, it's a bit of a mish-mash. I've been back and forth to various places over the last few weeks, and there are a smattering of things I'd like to share.

The first visit was to my niece in London. We ate a lot of cake, but in between pursuing this very important piece of reearch, we went to see an exhibition of paintings at Dulwich Picture Gallery, by Eric Ravilious, who was an official war artist in the Second World War. His paintings are water colours, but  they're very unlike most water colours. He is fascinated by the juxtaposition of landscape and man-made, particularly industrial objects, but also paints the most intriguing interiors. He uses small, precise brushstrokes to create the most wonderful luminosity in skies and seas, and finds beauty in places of no obvious loveliness, such as war offices and submarine interiors. For more about him, please see this post by Lydia Syson.

There is a rather sweet little coda to this. My niece was carrying her nine week old baby son in a sling, and he was the subject of many admiring glances. One elderly gentleman stopped and smiled. 'The best thing in the whole exhibition,' he said quietly.

My niece also has a two year old whose birthday I had missed, so we went to the very wonderful children's bookshop in Herne Hill, Tales on Moon Lane. My great-nephew likes buses and trains, and he likes things that rhyme. I found this book by Michael Rosen. I can't do a proper review of it, because I only had a speedy look through in the bookshop before handing it over - but apparently it went down an absolute storm with Ben. That Michael Rosen will clearly go far, as will his illustrator, Gillian Taylor. 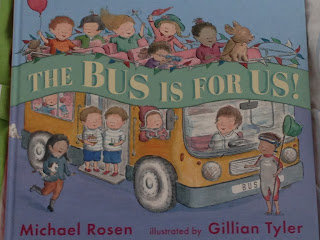 My niece also recommended some detective novels to me. They're by Anya Lipska. Set in London, they're about an unlikely crime-fighting duo - a small, blonde policewoman called Natalie Kershaw, and a Polish fixer/investigator called Janusz Kiszka. They'tr terrific - clever plots, funny, and with great characters - beside the two mains, there's Oskar, Kiszka's loyal, wisecracking but slightly ineffectual best friend. I've read all three - the first is Where The Devil Can't Go - and my only complaint is that the last one finishes with a heartbreaking hint of what could happen next - and probably a lengthy wait till the next book. Sigh.

I read the last of these books in Dorset, where we went for a few days and walked on the Jurassic cliffs and sat on the Jurassic shore. Here are some pictures. It was lovely. Enjoy your summer, wherever you are! 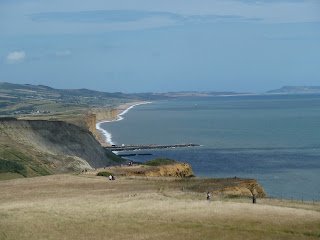