NIGEL: My family and other dogs, by Monty Don

I know that a lot of the people who read this blog are in America - so I'm guessing you probably won't have heard of a gardening presenter and writer we have over here called Monty Don. He heads up a weekly programme called Gardeners' World. It gives topical advice, and there are items about interesting gardens all over Britain, from tiny London plots to gorgeous stately homes: but at the centre is Monty's own garden in rural Herefordshire - Longmeadow.

It's a beautiful garden, divided into various sections. There's the Jewel Garden, full of brilliant colour; there's the Dry Garden, which is dry because it was created on top of a courtyard, there's a vegetable garden; there's a pond and an orchard and a mound created from a pile of spoil, now a vantage point where Monty and co can sit and watch the sunset with a glass of wine. And there's a potting shed, of course. 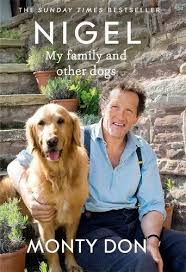 Monty is the centre of the programme, of course. But over recent years, the true star has turned out to be not Monty, but his dog, Nigel: a charismatic golden retriever who steals every scene. As Monty says:

When we are filming it is uncanny how he will always find just the one position where the combination of sunlight, flowers, the whole composition of the scene - about which he cannot possibly have the slightest notion - all come together to work perfectly around him.

And so now Monty has written a book about him. But it's not just about Nigel. Monty has always had dogs, and here he writes about many of them. As he does so, he tells us quite a bit about his life, and particularly about Longmeadow. But the focus is the dogs, and his relationship with them. It's full of a sort of calm wisdom, and in a completely un-pushy sort of way, he passes on advice about how to live with dogs (and how to deal with the pain when the time comes when you must part with them). He's gentle but unsentimental, amusing and kind. It's a delight to be in his company as you wander through the book, following Nigel as he hunts out tennis balls, swims in flooded fields and flops down close to wherever Monty is working. 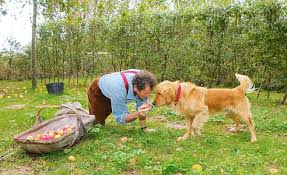 If you're interested in gardening and in dogs, this is a book you will thoroughly enjoy. Or it would make a perfect Christmas present for the right person. Reading it is like spending time in that sunshiny garden - without having to do any of the work!
Posted by Sue Purkiss at 17:10:00 1 comment:

Two posts from me elsewhere today: this one is over on The History Girls, and is about a wonderful visit a few days ago to Athelney (where Alfred undoubtedly burnt the cakes)  - to see this, click here.

The other is a review of The Wolf Wilder, a magical children's book by Katherine Rundell - that's here.
Posted by Sue Purkiss at 09:06:00 No comments:

The book I wish I could have written...

(This is a second outing for this post, which first appeared on An Awfully Big Blog Adventure yesterday.)

Last Christmas, I was lucky enough to be given a very generous book token, and I've had a very jolly time choosing books that have caught my eye from my local Waterstones, in Wells. One of the first was a book by Marcus Sedgwick, called The Ghosts of Heaven. He's an author I admire, and I think this book was shortlisted for the Carnegie, so it was an easy choice.

However, when it came to the top of the pile and I opened it, ready to plunge into a good story, I found that it was written in verse. To my shame, I decided that this made it 'difficult', and I wanted something at that time that didn't require a lot of effort. So it went back on the pile, and I only picked it up again a few weeks ago.

And it was the strangest experience. Because as soon as I opened it, I saw a drawing - a line which traced a spiral. Why was that strange? Because ever since I can remember, when I've doodled, in lessons or lectures or boring meetings, the spiral is one of my go-to doodles. If you look in any of my notebooks or old exercise books, you'll see it (along with swans, trees, faces, and abstract, cross-hatched scribbles). You have to concentrate hard to do a perfect spiral; it very easily goes astray, because it's difficult to keep the distance between the lines even. So it focuses the mind - though possibly not on what it's supposed to be focused on. 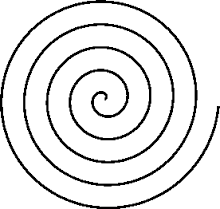 There is a mathematical way to create a spiral, and the spirals which illustrate The Ghosts of Heaven probably used it. You have to use the Fibonacci sequence. This is a mathematical concept - I am terrible at maths, and so I'm not going to try to explain this here; just google it, and you'll get a much better explanation than I can give you. But it's all tied up with proportions and patterns that appear in nature: you see it in a snail shell, an ammonite, the curled up frond of an emerging fern. And it's central to this book.

So that was the first thing. The second thing was that as I read, I realised that the first section of the book is set thousands of years back in pre-history, in the time when our ancestors made beautiful paintings in caves. Now - three years ago, I was in France. About half an hour from Cahors, there is a cave called Pech Merle. It's one of the very few painted caves which the public are still allowed to visit. I was fascinated, of course, by the engravings and paintings of bison, deer, horses, aurochs and so on, with their extraordinary economy of line and clever use of the natural form of the rock face.

But I was truly moved by the hand prints, like this one. They looked so fresh; they could have been made yesterday. It was so easy to imagine someone - probably a woman or a child, because the prints were quite small - placing their hand on the rock, blowing the ochre from a thin pipe to make a negative imprint - then standing back to see this mark that they had made, smiling with pride, telling the others to come and see. They created a vital connection which threw a bridge across 24,000 years. 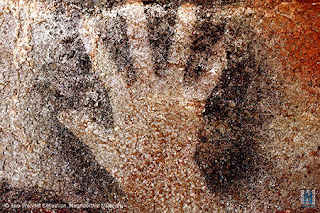 I kept thinking about those hand prints. I tried to write a story which would incorporate them, but it didn't work, so I abandoned it. Then, recently, I thought of another, very different way I might be able to use them. I'm working on that now, and I'm a little bit hopeful.

But Marcus Sedgewick has done what I tried to do in that first version - and done it triumphantly. He has incorporated spirals, and cave painting, and hand prints: and he's solved a lot of the problems I came across - and solved them so cleverly, so elegantly. Problems such as what kind of language you use to express the thoughts of these early people; what the purpose of the paintings may have been. He's done what I couldn't do. (So it's a good job I'm trying to do something quite different now.)

This isn't a review - there would be a lot more to be said about Marcus's book if it was. But it's about that feeling - when the knowledge uncurls, like the line of a spiral, that someone has already written the book that you really wish you could have written. I've never felt that before. It's the oddest sensation, it really is. Like meeting a doppelganger, a person who, impossibly, looks exactly like yourself. It's unnerving, and just a tiny bit sinister.