Some of my books

Jack Fortune and the Search for the Hidden Valley

This is my most recent book - it came out in 2017. It's set in the 18th century, and it's about the adventures of a boy who sets off for the Himalayas with his (rather timid) uncle, who aspires to be a plant hunter.

The plant hunters were - still are - crazily brave individuals who plunged into all sorts of remote and often dangerous places in search of new species of plants. The real ones had some incredible adventures, and so does Jack. He encounters all sorts of obstacles as he and his uncle search for the legendary blue rhododendron - geographical, natural, and human. Will he win through? Well, if you want to find out, you know what to do...

Emily - there she is on the cover, in red - and her parents have embarked on the famous SS Great Britain. The ship is the first-ever iron ship and the biggest ship in the whole WORLD. It's designed by the great Victorian engineer, Brunel, and its bound for Australia. Emily doesn't want to be leaving her home, but things start to look up when she meets Thomas and his pet rat, Barney. Then the children hear about a ghost, and there are spooky goings on in the deep, dark hold...

The book is beautifully illustrated by James de la Rue.

King Alfred remains the only British monarch to be dubbed 'the Great'. He was real, and he achieved remarkable things - yet he's often confused with the legendary Arthur, and his importance is forgotten.

I wanted to explore how he became the remarkable man and ruler he turned into. A huge bonus was that along the way, I found out about his daughter Aethelflaed, who later became a ruler in her own right: the Lady of the Mercians. Most of the story is told through her eyes.

There's a touch of magic and mystery, too, in the character of Cerys, a silver-eyed Briton who reminds Alfred that he has a responsibility to all his people.

Warrior King was originally published by Walker Books, but is now republished by Roundhouse Books (ie, me!).

This is an anthology written by The History Girls, a group of historical fiction writers, and published by Templar. Each story features a woman who has featured significantly in the history of Britain, from Boudica through to Emily Davison, the suffragette, and Amy Johnson, the pioneer pilot.

For my story, I was delighted to be able to revisit Aethelflaed and take her story on - at the point where she leaves Wessex and goes to Mercia to become the wife of the Lord of the Mercians.

‘Tom was gazing absently at the Willow Man. The sun was behind the figure’s arm, but then something odd happened: the arm seemed to move, as if it was beckoning, releasing the sun so that its rays reached and dazzled Tom…’

When illness strikes his younger sister, Sophie, Tom feels forgotten in all the turmoil. His

friend Ash is the only person who understands, but Ash has problems of his own.

Towering above the fields, the Willow Man seems powerful and strong – as if at any moment he could run away. Can he help Tom, Sophie and Ash break free as well?

This book is about children who are ‘stuck’ in different ways: through illness, through family problems, through difficulties at school. But it's also about how incredibly difficult it can be for us to communicate, to talk about what we really feel - and to find someone who will listen.

And it's also about how sometimes, a little bit of magic comes along to help... Originally published by Walker, it's now available as an ebook. 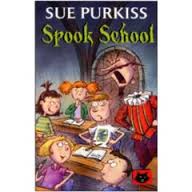 Spook School
What could be worse for a ghost than not being frightening enough? That's Spooker's problem as he faces his Practical Haunting examinations at the Anne Boleyn Secondary School, under the watchful eye of the Inspectre-ate and Sir Rupert Grimsdyke (who's definitely not Spooker's favourite teacher). He isn't helped by the fact that he's sent for training to a brand-new house in Buttercup Avenue - not at all the kind of place where ghosts feel at home. Spooker must find a way to spook the most unspookable people imaginable ...Or maybe ghosts don't have to be scary, after all? 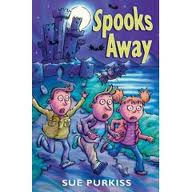 Spooks Away
Spooker is back for a new school year at the Anne Boleyn Secondary School, and now that the wicked Sir Rupert is out of the picture, he hopes his life will be much easier. But when he goes on a residential trip to a remote Scottish castle to make a video about the school's new approach to haunting, strange happenings start to take place - it's almost as if the ghosts themselves are being haunted. Who or what can possibly be behind these odd events?

Both books are illustrated by the brilliant Lynne Chapman.