Congratulations to Tanya Landman, winner of the 2015 Carnegie Medal!

The Carnegie Medal is the big one for writers of children's books - the one we'd all like to win. (Well, we'd like to win any prize - but this one would be the cherry on anyone's cake!) The titles are chosen by librarians, and it's judged by a panel of librarians - but it's also 'shadowed' by lots of school children, who read the shortlisted books and discuss them, and can post their reviews on a special site. So there's a lot of buzz around it, a lot of excitement.

Well, this year it's been won by Tanya Landman for Buffalo Soldier, a book about a former slave girl who, in the chaotic aftermath of the American Civil War, decides her safest course of action is to pass as a boy and join the Yankee Army. It's remarkable, with a unique and consistent voice which absolutely draws you into the story and the head of its heroine.


The award ceremony was today, and Tanya, who is lovely and is a friend, used the occasion to make a speech in which she expressed her dismay at the effect that continuous testing and a highly prescriptive curriculum is having on children's creativity - and also her concern over the pressures on libraries, which are losing staff and funding to the point where many have closed and more are threatened with closure. It was a very good speech, and I expect it will be widely reported.

But to return to the book - I reviewed it not long after it first came out, and you can see that review here.
Posted by Sue Purkiss at 16:26:00 2 comments:

Marbeck and the Gunpowder Plot, by John Pilkington

Before he took to writing novels, John Pilkington wrote television scripts and plays for radio and theatre. Clearly, he has used the skills he learnt there in creating his historical thrillers: they are tightly plotted and full of reversals and surprises, with cliffhangers which are - literally, in the case of some of the characters - to die for! 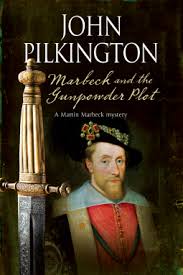 It's obvious from the title of this novel (the fourth in the Marbeck series) that it features the famous gunpowder plot. Yet it's a tribute to Pilkington's writing that the outcome does not feel at all obvious; there is no loss of tension as you follow Marbeck's investigation. For Marbeck is an 'intelligencer' - a seventeenth century spy. His immediate master is called Monk, but he ultimately answers to Robert Cecil, spymaster first for Elizabeth and then for her successor, James. Marbeck discovers that there is a threat from Catholic insurgents, but he doesn't know what it is. He receives hints and clues from various sources, and it's a dangerous game piecing the story together and finding out who he can trust; the answer to that last question, of course, as in any good thriller, is very far from obvious.

The Tudor and early Stuart periods are so popular with writers that their significant movers and shakers have become familiar figures. Marbeck's world reminded me a little of that of C J Sansom's investigator, the lawyer Matthew Shardlake - the two are very different characters, but they operate in similar territories, though Shardlake is from the time of Henry V111. Cecil is a significant character in Watch the Lady, Elizabeth Fremantle's recently published novel, and he and his father appear in Philippa Gregory's novels about the Tradescants, Earthly Joys and Virgin Earth. And of course, the Tudor court and its dangerous politics are the subject of Hilary Mantel's Wolf Hall.

So the murky world in which Marbeck operates is a familiar one. It's certainly familiar to Pilkington; he re-creates each setting with great assurance. He seems to know early Stuart London better than most people would know the London of today - but more than that, he knows the detail of everyday life: little details, such as that 'muscadine' and 'alicante' were among the tipples of the time. And he can paint a vivid picture for us of what the hiding place of a Catholic priest would have looked and smelled like, of the vaults underneath Parliament, or of the seedy back streets and lodging houses.

Unlike the rather fragile Shardlake, with his crooked back, Marbeck is physically tough. He's a skilled and ruthless fighter, and the body count rises as he pursues his investigations. But he has his areas of vulnerability too: in particular, there is his love for Meriel. The story of this is obviously carried over from previous books, and I'm not sure what the obstacles to it were: in this book, she tries to put him off, but it's clear to the reader that they love each other. He is convinced that he's lost her, but by the end, it seems that there may be hope. But nothing is resolved: the ending is a triumphant cliff-hanger, and the book is a gripping read.