There have been positive outcomes of the lockdown brought about by the pandemic, and one of them (if you're a book enthusiast, as I clearly am), has been the amount of material generously put on line by book festivals and other providers. I've seen all sorts of interesting talks which should have taken place at book festivals I would never have gone to (but may well in the future); and I've also seen a few given by eminent authors who belong to the Society of Authors (which is a sort of writers' trade union).
One of these was given by Philip Pullman, writer of Northern Lights and great champion of authors' rights. I've heard him speak a couple of times, the first time in a bookshop in Bath over twenty years ago. He didn't seem to have changed all that much, and was just as interesting to listen to.
The interview took place over Zoom, with Pullman in his study, telling us about his working habits and about some of the things he keeps around him. At one point he picked up a book, and began to enthuse about its writer, Mick Herron, saying how marvellous he was and how he always looked forward to his next book. I remembered this not long afterwards when I was in search of something - preferably a series - to read, which would take me out of lockdown life and into some other place - I didn't particularly mind which place, so long as the story was gripping and well told. If you've had a wander through this blog, you will know that I like detective/crime series: this is in that neck of the woods, but it concerns spies.
And what a curious bunch of spies they are. They inhabit a crumbling, unsavoury office block in London called Slough House, where every room seems to have an unpleasant stain somewhere - either on the carpet or on the wall - which is what's left over from some kind of incident involving the splettering of bodily fluids. These are failed spies - rejects from the department's more glamorous headquarters in Regent's Park. Sometimes they have been ejected because they've made a spectacular mess-up, like leaving secret files on the tube, sometimes because of a car-crash in their personal life - alcoholism, for instance, or gambling. Sometimes they're there simply because they got in someone else's way - someone, for instance, like Second Desk (sort of second-in-command) Diana Taverner, who is completely ruthless and entirely without any moral sense: or like Peter Judd, a politician with scruffy blonde hair and a bicycle, who hides his - well, yes, ruthlessness and lack of any moral sense - behind the facade of a bumbling would-be comedian. 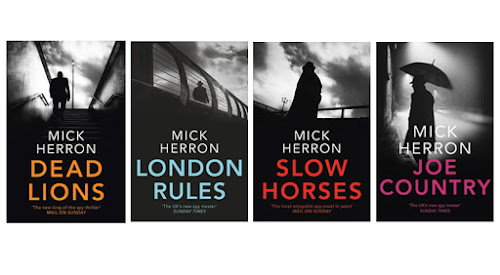 The expectation is that the slow horses ( a play on Slough House - geddit?) will eventually get fed up of the mindless and pointless admin tasks they are given to do, and resign, thus saving MI5 the expense of a redundacy package or similar payoff. But the slow horses all quietly dream of redeeming themselves, and returning once more to the Park, so they keep on keeping on, despite the mind-numbing boredom and the creeping despair.
The person at the apex of Slough House is Jackson Lamb. Lamb is a relic of the Cold War: he shares the DNA of George Smiley, but also of Warren Clarke's perpetually disgusted detective, Dalziel. He is flatulent and foul-mouthed, cruelly sarcastic - and very funny. He's also very effective. When the point is reached - as it always is - where everything has gone horribly wrong and it looks as if the end is nigh for one or all of his failed spooks, Lamb is suddenly silently there, just in time to provide a solution and prove to the corrupt bosses at MI5 that they underestimate him at their peril.
Of course, if all the slow horses did was to push paper across a desk, the stories would lack a certain something. But somehow or other, they always seem to become involved in a live case: like a group of ragged Don Quixotes, they're always galloping to someone's rescue - and into danger and jeopardy.
I agree absolutely with Philip Pullman, and with all the bodies which have awarded him numerous prizes and awards. Mick Herron is not only a brillant storyteller: he's also a terrific writer. There are echoes of John Le Carre, but also, particularly in certain passages which dwell lovingly on the utter decrepitude and hopelessness of Slough House, of Charles Dickens. And he's also very funny. I particularly cherish a character called Roddy Ho, a computer geek, who has absolutely no clue as to how awful he is as a human being. And Shirley, small, fierce, foul-mouthed, but incredibly brave.
There are six in the series so far. The first is called Slow Horses, and you really should read them in sequence. But just a word of warning; if you're looking for something to make you feel positive about the state of the nation, this series is not it. If, on the other hand, you're after glorious characterisation, twisty plots and sharply ironic writing, you have a treat in store.
PS - The interface where posts are written has just been redesigned - and as a result I've just discovered a whole stack of comments awaiting moderation which I didn't know about. Quite a few were spam, but by no means all. So if you've noticed that your comment hasn't appeared - my apologies! And thanks for comments that went unacknowledged.
Posted by Sue Purkiss at 17:50:00 3 comments:

As you will probably have seen on the news, President Macron recently visited London to celebrate the anniversary of Charles de Gaulle's famous broadcast from Britain at the beginning of the Second World War, in which he called on the French to continue to resist the occupying army.

This reminded me of a story told by Phyllis Goddard - a wonderful lady, now in her late nineties, who used to come to the writing group I run in Cheddar until she became too frail to do so. Phyllis has lived for many years in Cheddar, but she's from London, and she wrote many pieces about her memories of her life there before, during, and after the war.

One that had us all on the edges of our seats when she first read it was the story of her encounter with General de Gaulle. It happened like this.


When she left school at sixteen, Phyllis's first job was at the Royal Empire Society in the West End. Phyllis was from the East End, and at first she was awestruck by her new surroundings, but she soon settled in. The R.E.S. was a club where members could come and stay, or just drop in. Visitors, particularly those from abroad, would often use it as a forwarding address for their mail, and to begin with, Phyllis worked in the office where this mail was sorted and forwarded or stored. But after the bombing began, there were staff shortages, and she was often called on to be the duty receptionist.

One evening, she noticed two officers sitting talking. She couldn't quite work out where they were from, as they weren't wearing their caps. But one of them, who was particularly noticeable for his great height, came over to the desk with a query, and she realised from his accent that he was not British.

He got chatting to Phyllis, asking her about her family, how old you had to be to be called up, whether women were also conscripted, and so on. The next evening, she received a note from the hall porter, saying that the two men were not to be charged for their visit: the bill was to be sent to accounts. That was unusual, and she was intrigued.

Later that evening, the two men left, but before they did, the tall one came over to see Phyllis. He thanked her for chatting to him the previous evening - perhaps their conversation had provided him with a brief respite from weightier matters? - and gave her a brown envelope. This is how Phyllis described what happened next.

I opened the envelope and inside was a small card and a very nice cream coloured scarf, edged with the blue, white and red colours of the newly formed Free French organisation. I picked up the card and read the words 'Thank you'. On the reverse side was printed 'General Charles De Gaulle'. I was lost for words!

I wondered if those two officers had sought 'sanctuary' in our lovely building and had been in the War Office during the day making arrangements to move on to where they would be safe to do their war work?

Hitler missed them though. They had left when he dropped two bombs on the R.E.S.

Later, in 1944, a 'flying bomb' destroyed our house, leaving no trace of my Free French scarf, but no bomb could destroy the memory connected with it.

The whole story, along with several others by Phyllis, was published in the first anthology of work by our writing group, Through The Barn Door. This book was intended for families and friends; it is still available, but at quite a price! (Click here.)

Two more recent anthologies, Just Write, and Encounters With War, are available from Amazon at a VERY reasonable price. Profits from both go to the Cheddar Youth Trust.