Since I started writing, I've quite often been asked to provide a brief biography, and I've discovered that of all the snippets and words of revelatory wisdom I've provided, there are just two that make people sit up and take notice. So here they are.

The first is that I was born with six fingers on each hand. This gives me something in common with Ann Boleyn, because she was too. I think she kept all hers, though she doesn't seem to have them in this picture (probably bad for her image). My extra ones were cut off soon after birth, and I just have the scars now. Having six fingers is associated with witchiness - and, well, all I'm saying is there have been times... but probably not as many as Ann Boleyn had. 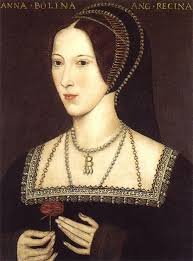 When The Willow Man came out, I had an email from the Guardian, asking me to get in touch. I was very excited about this, envisaging a full colour spread about my new book, from which fame and fortune would surely ensue. But no - they'd read on the Walker Books website about  my twelve fingers, and they were doing a feature on freaky hands. (Why? I've no idea.) To add insult to injury, when they found out I now only have the regulation ten, they lost interest.

The second thing involves Game of Thrones. Before she became an actress, I met Maisie Williams, who plays Arya Stark in the series. Here we are together. I was visiting her school, Norton Hill, to talk about Warrior King, my book about Alfred.

When she was 18, the Daily Mirror asked her to choose some photographs to illustrate her life so far. And she chose this as one of them, mentioning that this (Warrior King) was an earlier encounter with fantasy, swords, and swirling mists! (Or words to that effect.) My brush with fame... 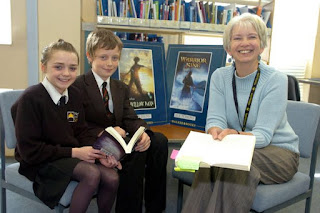 For more information about me and my work, you could go over to my website, here.