The Last Bear, by Hannah Gold

This book was written for children - but that certainly doesn't mean it should only be read by children. It's original and captivating, and very timely.

The Last Bear is an unusual and enchanting book which doesn't shy away from difficult and pertinent issues - in particular, it looks at the question of climate change and what it's doing to life on our planet. But as well as this, it explores the loss of a parent, and what that does to the remaining parent as well as the child. If that all sounds very heavy, it's really not. The 'messages' emerge very naturally from the story - there's no sense whatever that the reader is being lectured. 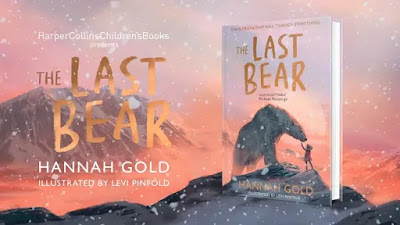 April Wood is eleven, and lives with her father, a climatologist. Her mother died when she was four, so April scarcely remembers her - 'whenever she thought of her, it was like thinking of a lovely summer holiday she'd once been on.' Her father, however, has coped less well. He buries himself in his work, and scarcely notices that he has a daughter. So, for instance, April has to cut her own hair with a pair of garden scissors, because her father simply doesn't see that it needs attention. So April looks odd, and is teased at school. But she's not unhappy: she loves animals, and enjoys watching a family of foxes which lives in their unkempt garden: '...she preferred animals to humans anyway. They were just kinder.' That last, brief sentence really sums up how she relates to other children: she does not like school.

Then an opportunity arises for her father - and April - to go and spend a few months on a remote island - Bear Island - in the Arctic Circle. Despite her grandmother's misgivings, April is delighted, because she thinks that, as they will be the only two people on the island, it will bring herself and her father closer together - they'll make snowmen, they'll explore, they'll observe wildlife together - he will 'see' her. But none of this comes to pass: her father is too busy, engrossed in a job which should really be done by two people - quite apart from the fact that he never notices April anyway. (Really, you feel like shaking him. He's not intentionally cruel, but he is selfishly wrapped up in his own grief.)

She's disappointed, but she's a resourceful child, so she goes off on her own to explore. In particular, she believes that there might be a polar bear on the island - even though she's been told that there can't be, because since the ice has been receding because of climate change, bears can no longer reach Bear Island from Svalbard further north. But she turns out to be right - there is a bear, and it's in pain and in desperate need of help.

The story of how she and the bear get to know each other, and how she helps it to regain its health and strength, is magical and very touching. I won't tell you what happens at the end, but trust me, your heart will be in your mouth. April puts herself in extreme danger in order to save the bear and get him back to Svalbard: her adventure, in the end, brings her closer to her father - who finally wakes up and realises how close he has come to losing his daughter. 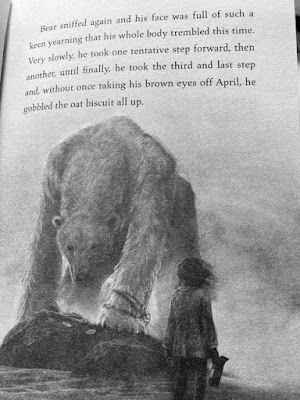 Hannah Gold brings off a clever sleight of hand with this story. It is not, in some ways, realistic: a real polar bear would not, one imagines, allow a child to come so close to him, let alone give her rides on his back: a real organisation would not - one imagines - allow a man to take his small daughter to live on a remote island with no shops or facilities, let alone a school. And as for what happens at the end - well, health and safety would have conniptions.

But you accept all these things, because everything else about the story is so real and so convincing. The bear's physical presence is vividly evoked: his smelly breath, his size, his strength - and his plight. And April, with her courage and persistence, is a character you absolutely believe can win through, despite the enormous obstacles she faces.

The book is beautifully illustrated by Levi Pinfold. His pictures show just what a huge and powerful beast the bear is: April is tiny beside him. Tiny, but tough, imaginative and resourceful. It's a thoroughly delightful book - I loved it.

An apology, and thanks for all the comments!

I've often felt a little bit sad that although I get readers on this blog, I never seem to get any comments.

But I've just discovered a whole load of comments which have been sitting there, some of them for ages, waiting patiently to be moderated!

It was such a treat to read them all, and now I'm off to change the settings so that this doesn't happen again. I must have changed them after a spam attack, and then just forgotten about it.

I feel very cheered, and will post a picture of cowslips to say a big fat thank you to you all! 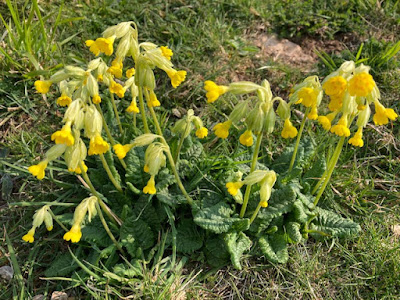 The first thing to say is that I do realise how useless I am at keeping up this blog. I am very envious of a friend who has written down every book she's ever read in a notebook (several notebooks? A bookcase full of notebooks?) - and yet I have utterly failed at writing a bit about a book just once every couple of weeks or so.

I'm not making excuses - well, I am - but I think it's because I read a lot, and as soon as I've finished one book, I start another. Plus, I sometimes have several on the go at the same time. And during this lockdown in particular, I've really felt the need for bookish worlds to escape into, one after another - and to stop to review each one just seems too big an ask. (Not, of course, that anyone's asking except me.)

But, I've just finished the latest draft of my work in progress and don't yet know what I'm going to write next, so I'm going to try and catch up a little bit. But of course, it's some while since I've read some of these books, so you'll have to bear with if if there's a certain lack of detail. 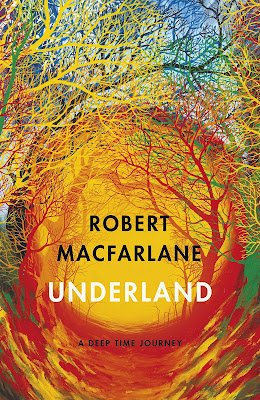 First up is Robert Macfarlane's Underland. Now, I have to confess that while I have read other books by Macfarlane, I haven't always round them easy to get into. Typically, I read a few pages or a couple of chapters, and think Oh, what beautiful writing this is! - and then find myself gravitating towards something easier. I do wonder if this is partly to do with being immersed in children's books, and in crime fiction. With both of these, the story is all. At the end of each chapter, there needs to be a hook which draws you inexorably into reading the next chapter. And you don't spend an awful lot of time writing description - there is room for it, and some children's books have mouthwatering descriptions - but it's subservient to the story.

With nature writing, the case is quite different. I think it's probably fair to say that with nature writing, observation and description form the bedrock of the essay or book. Other things will emerge, but that's where you start. So your expectations need to be different. You need to slow down, take your time, read carefully. Whereas naturally, what I do is gallop through.

However with Underland, it was different. It was gripping.

As you might deduce from the title, it's about exploring underground. It's divided into three sections, called the first, second and third chambers. The first deals with caves and tunnels in Britain; the second with undergound tunnel networks in Paris, Italy and Slovenia, and the third with caves in Norway, Greenland and Finland.

The first chapter concerns the Mendips - of which the hill in the title of this blog is one. Macfarlane doesn't just desribe the landscape. He muses on it, reflects on it, explores it through a network of ideas and cultural references. Looking at this first chapter again, my eye is caught by this, from Sean, the friend who will be his guide to the Mendips:

Macfarlane expands on this, illustrating the thought with lots of examples of ancient burials, in Austria, in Israel, in Somerset itself, and mulling over their significance. Then, he goes underground with Sean. There is climbing over wet rock, there is the rope getting stuck, there is squeezing through narrow passageways. It's all quite terrifying - especially when he tells the incredibly sad story of a caver in the Peak District who got stuck in a narrow gulley and could not be got out. He's there to this day. So nightmares come true.

And this is the pattern of the book: erudite musing about the historical, philosophical, cultural or scientific significance of what he's seeing, alternated with jaw-dropping accounts of dangerous descents. I confess I'm a complete wuss: scared of heights, depths, deep water and narrow spaces. So I'm fascinated by the exploits of someone who is clearly not any of those things. And I am interested in caves, because of something I've been writing. And the writing is beautiful. So, yes, I was hooked.