Regular readers of this blog will know that I go to Brussels quite often, because I have family there. None of them, thank heaven, were caught up in yesterday's attacks, but it was a bit of a moment when I read the breaking news of the explosion at Maelbeek metro station; my son goes through there on his way to work.

I wouldn't claim to know Brussels all that well. When I go, it's to visit family rather than to visit the city. But I've nevertheless become very fond of it: the Jubelpark, or Parc du Cinquantenaire, with its museums and rose beds and playgrounds and wild parrots; the forest which edges the city in the southeast, and where families walk and cycle and run at weekends; the Palais des Beaux-Arts, the waffles and chocolates, the comic book characters everywhere which remind you that Belgium is the home of the comic strip. The Brussels I know is a pleasant place, a nice place to be.

Obviously that's not how everybody sees it. I can't begin to see into the minds of young, disenfranchised men, who can not only contemplate the possibility of doing violent, indiscriminate harm to people they don't even know - but can actually carry out such acts. I don't know, what, in the aftermath of yesterday's attacks, anyone can usefully say.

I'm not going to say, 'Je suis Bruxelles', because it's not a declaration that really seems to me to mean a great deal. But I just wanted to say to the people of Brussels that I, like so many others all over the world, am thinking of you. And in the end, just as in the adventures of Tintin, the bad people will not triumph. But I know also that for the families and friends of the victims, that thought will provide precious little consolation right now.
Posted by Sue Purkiss at 16:27:00 No comments:

Email ThisBlogThis!Share to TwitterShare to FacebookShare to Pinterest
Labels: Brussels

Am over on The History Girls today - indulging in a bit of time travel back to 1970s Barmouth. On a Sunday. Big mistake... See why here.

And over on Eclectic Electric, a lovely review of Warrior King from Karen Bush. This is my book about Alfred the Great - in which Alfred is a hero, not the weed he appeared to be in the recent TV serial...

You can read the review here, and you can buy the book here.

And IF you read it, and IF you like it, it would be truly magnificent if you could post a short review on Amazon: it seems that when you get a certain number of reviews, Amazon starts to promote the book, and that would be nice. Very, very nice.
Posted by Sue Purkiss at 08:54:00 No comments:

The Drover's Dogs, by Susan Price

I only got this yesterday, but I've finished it already - even though I'm in the middle of reading a novel for fun, a non-fiction book for research, and I had to put on a sudden unexpected spurt to read book group book for tonight, when I thought it was for next week. I have to admit I skimmed this last - it didn't grip. 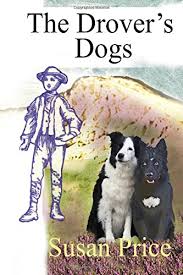 But The Drover's Dogs did, very much so.

It's told in a very distinctive voice - the voice of an old man remembering his life as a ten year old child, in Scotland at the beginning of the nineteenth century. The book begins with Sandy being virtually sold by his poverty-stricken mother to a neighbouring farmer. It's tough reading at this stage, as the narrator relates his bewilderment and disbelief as he realises what is happening to him. Things only get worse as he finds that his new 'owner' is a cruel bully, as is his son; Sandy is not even allowed to eat what little food he is given with the family, and he has to sleep out in a shed with only sacks and rank straw for bedding.

Finally he runs away. Fortunately for him, he falls in with two dogs - the drover's dogs - who are travelling back to their home on Mull, having been sent back by their owner after helping him take cattle down to the lowlands to sell. The dogs look after Sandy, and their kindliness foreshadows that of their owner...

It's a simple enough story, but the way it is told is enthralling. Susan Price makes you see, hear, smell and taste life in this particular time and place - and she has created such an engaging character in Sandy that your heart sinks when when he's sad, and you smile when he's happy - and you really can't leave him till you know that he's going to be safe and sound. Some of it is quite hard to take - bullying, cruelty, extreme poverty: all these are harshly present. 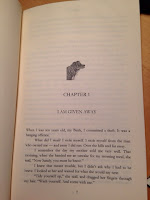 A word about the layout, which I find very satisfying. It's quite a large book - 23cm x 15cm - which I like. And when you open it, it's very easy on the eye, with generous amounts of space and a nice little drawing at the head of each chapter - hope you can see this in the picture, above.
Posted by Sue Purkiss at 08:42:00 2 comments: 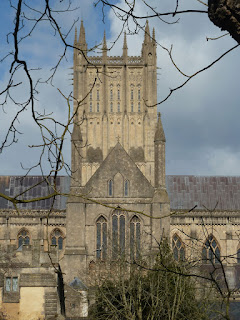 This is Wells Cathedral, in Somerset. It's a very beautiful cathedral, with all sorts of treasures and interesting features, and to one side of it is another treasure. This is the garden of the Bishop's Palace.

In Wells, as the name suggests, there is a lot of water - it springs from deep inside the Mendip Hills. Little streams run down either side of the main street, and the palace is surrounded by a moat, the home of swans and ducks. (There is even a bell, which the swans are supposed to ring when they want food.) The garden is in two parts: one enclosed by the  moat, the other outside. You never know what you're going to find, when you go through a door in a wall and enter a garden... 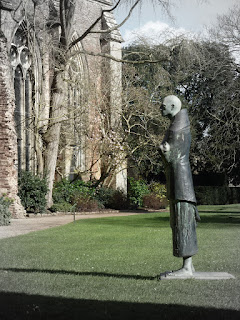 Here to greet you is a pilgrim - one of many who must have come here over the centuries. This one was created by David Backhouse. 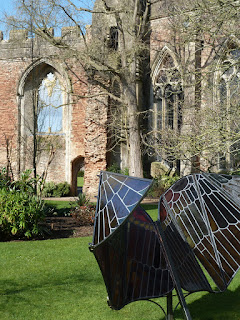 And here are two winged creatures. Both angels? Or is the first, with its dramatic, iridescent wings, a dragon? 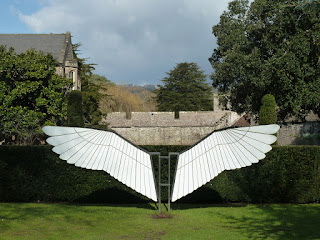 And here is a king's head. He looks as if he's been carved from a nearby fallen tree. When the ivy winds round him, perhaps he'll transform into a Green Man. His face has that look about it already. 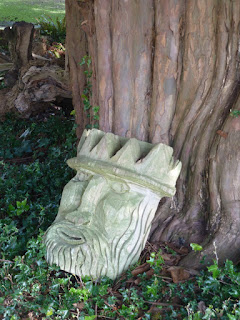 If you climb the bank, sprinkled at the moment with primroses, you come to this bastion - and you realise that this wasn't always a place of reflection and tranquillity. In 1642, this country had its religious wars. Somerset was a puritan stronghold, and the king sent troops to restore his rule. They fired at the palace from a nearby hill, and shots were fired in return from this very place. Those were turbulent years. 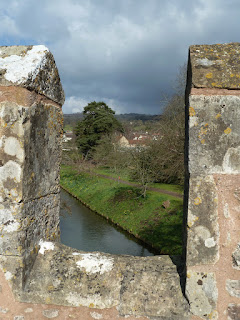 Here's the moat. The bank is covered with miniature narcissi, snowdrops and primroses. 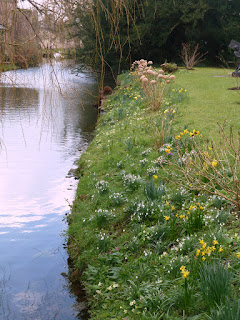 You leave the inner garden - which at the moment is resting, covered with a thick layer of compost to give the roses a good start - and cross over a bridge to the outer area. 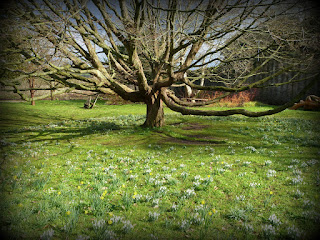 Here, we are in what used to be called the Camery. It was the Bishop's orchard. Now snowdrops grow in profusion under the trees - and look, there's a dragon! 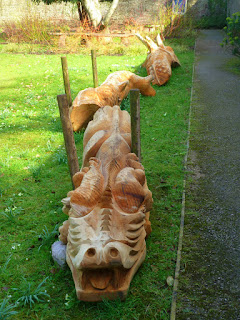 Beside the Camery are the community allotments. 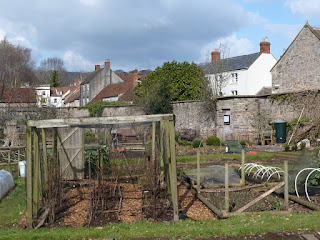 Quite a view to admire as you look up from your digging or planting. 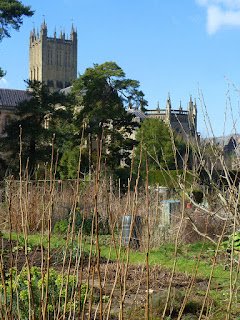 I thought this corner would be the perfect setting for Mr MacGregor and Peter Rabbit. 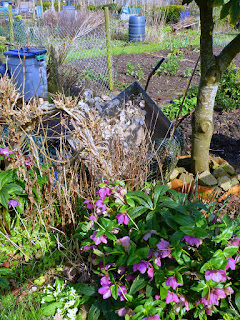 On Saturday, I had the gardens almost to myself. I love this time of year in a garden. Things are just stirring. The main event is yet to come; later in the season, the empty beds will be full of colour and scent and movement, and the paths will be busy with people. I'll be back then and I know it will be beautiful. But I think I'll miss the solitude, the sense that growth is about to happen - that everything is possible - of early spring.

The kiss of the sun for pardon,
The song of the birds for mirth
You are nearer God's heart in a garden
Than anywhere else on earth.