The Overstory, by Richard Powers

I hardly know where to start with this book, which I've just finished. It is quite extraordinary.
It's about trees. It's a novel, but it covers some of the same ground as non-fiction books such as The Hidden Lives of Trees and Wilding (see review of the latter here): namely, recent research has shown that trees are far more conscious beings than we ever dreamed of: that they communicate; that they defend themselves, that they are hosts to vast numbers of other organisms; that even in death, if they are allowed to lie where they fall, they will host more life - not just regrowth, but quantities of animals and insects and other froms of plant life. So when you knock down an ancient woodland (supporters of HS2 please note), you are destroying a whole eco-system which has been developing for hundreds of years - and which will take hundreds of years to replicate. Planting new trees doesn't do the job, though it's better than nothing. And that's not to mention what trees do in terms of soaking up carbon dioxide.
Like Wilding, Overstory makes you adjust the way you see life on our planet and our place within that incredibly complex network of systems. For so long, we have seen ourselves as separate and superior to nature. We've plundered the earth for what we want, and while we didn't want too much, that was okay. But now, we want more and more, and we take more and more, and the planet can't cope. We have to see and understand this if we want life to continue to exist on our beautiful, once-in-a-universe planet - or at least, if we want human life to continue. We are part of nature; we aren't separate. If we destroy forests, we destroy our own future.
So how do you tell that story in a novel? Well, this is how Richard Powers does it. The book is set in America. It features nine individuals, beginning with a fairly brief history of each of their lives. (The book is very long, so he has plenty of time.) He is very good at this. Each character is very real, very complex; each is smart in different ways. So for instance, the first story concerns a family descended from a Norwegian immigrant who moves out west, bringing with him some seeds from an American chestnut tree. Most of them don't survive, but one does, and grows into a vast and beautiful specimen which exercises a strange fascination over the Hoel family. Partly this is because a disease has killed off most of these trees: the Hoel tree has so far survived because it is so far west - but the disease spreads inexorably, as these diseases do.
Each year one Hoel after another takes a photograph of the tree. Eventually, the last descendant, Nick, creates art installations around the tree, and becomes more and more passionate about trees. Eventually, he meets up with the other eight, who by very different paths have also become desperately concerned about the way big business is destroying woodlands that existed long before white people colonised America: in the end, they take drastic measures which have a huge effect on all of their lives.
I can't pretend I understood everything in the book. In particular, there is a character called Neelay who creates virtual reality games. I have never played computer games, so I don't understand the simplest things about them - and this story line becomes very complex indeed.
But even so, I found it absolutely compelling. Here is a sample of the writing. The character is Patricia Westerford, a scientist and academic who lives in a hut in a forest.
The trees are busy tonight, fixing carbon in their dark phase. All will be in flower before long: huckleberry and currant, showy milkweed, tall Oregon grape, yarrow and checkermallow. She marvels again at how the planet's supreme intelligence could discover calculus and the universal laws of gravitation before anyone knew what a flower was for.
The book is an astonishing achievement. Heart-breaking and inspirational in equal measure.
Posted by Sue Purkiss at 11:33:00 No comments:

The Water's Daughter, by Michelle Lovric

Michelle Lovric writes fiction for adults and children: a common theme of all her novels is a Venetian setting, and it's very clear from a reading of any of her books that she knows Venice very well, and loves it very much - I think it could certainly be argued that Venice is absolutely at the heart of her writing. She also writes non-fiction; most recently she collaborated with Gemma Dowler on a book about her mudered sister, Millie Dowling, which topped the Amazon and Times bestseller charts. She's also compiled numerous anthologies.
This book, which is for children, follows on from several others set in the past, and in a parallel Venice . Geographically it's remarkably similar to the city we know today, but it also features a whole troupe of magical creatures. I was particularly delighted to meet the mermaids again: charming, beautiful, but very down-to-earth (!) creatures who live underneath the city and are distinctly foul-mouthed, owing to the fact that they learned their language from pirates. But new to this book is a whole palazzo full of magical creatures who have been transported (by mistake) from Arabia - including a beautiful and utterly amoral djinniya, who has great powers - which, fortunately for Venice, she is not very competent at handling. 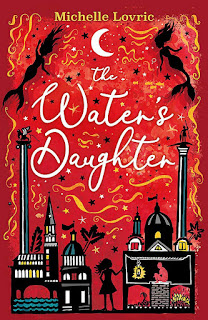 Its human heroine is 12 year old Aurelia Bon, the child of appalling parents who at the beginning of the book are planning to force her to marry the unpleasant son of an unpleasant family; her only other option is to be immured in a nunnery. Aurelia is not the kind of girl to put up with this sort of treatment - she has an extraordinary gift (when she touches a building, her fingers sense its history) and with this, and with a naturally strong personality, comes a firm sense of her own importance. She runs away, and encounters all sorts of dangers but also all manner of wonders.
She has to battle against all sorts of enemies: a jealous historian who envies her ability to pull the crowds, and has designs on her magical fingers; her ghastly suitor and his family; the very creepy priest in charge of the nunnery; a bunch of pirates (who have lots of saving graces); a group of venal politicians/businessmen whose aim is to such Venice dry of her wealth; and the djinniya. The tussle between the latter and Aurelia is positively epic: they're both powerful, both very selfish, and both actually rather likeable - more so as the book goes on and they have to face up to some uncomfortable truths about themselves.
The book is a glorious flight of imagination, with excitement, humour and glamour in shed loads. I would put it at the upper end of middle-grade - particularly near the beginning, there are some quite scary bits, which might be a bit challenging for younger children - but for the right reader, it offers a gorgeously rich reading experience. And there are the other Venetian children's novels to move on to - it's not essential to read them in sequence.
Posted by Sue Purkiss at 14:28:00 No comments:

In honour of National Meadows Day!

We have experimented this year with a mini-meadow in our front garden, and it’s giving us - and, I hope, lots of insects - a great deal of pleasure. So, as it’s National Meadow Day, I thought I would share a few pictures! 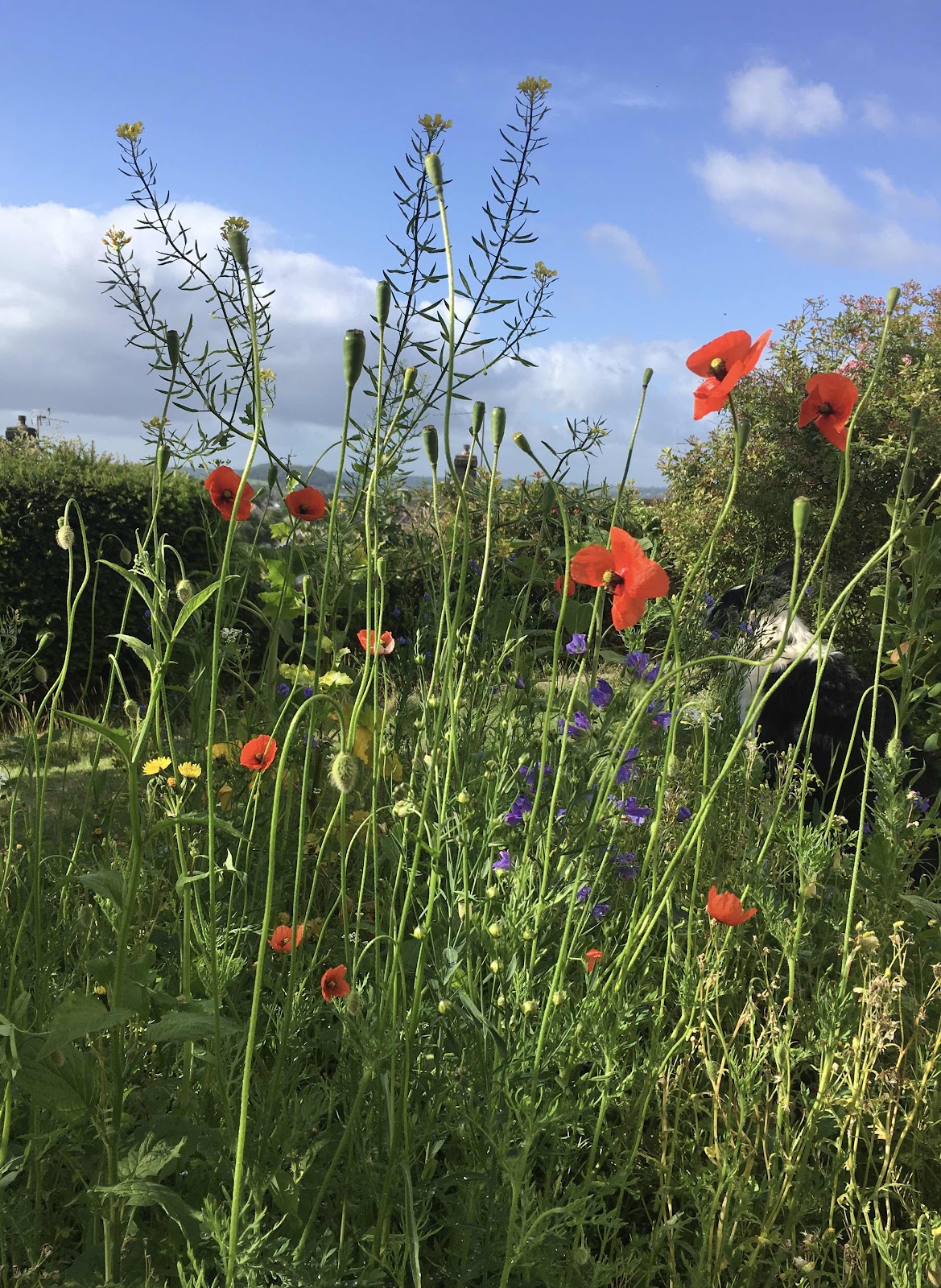 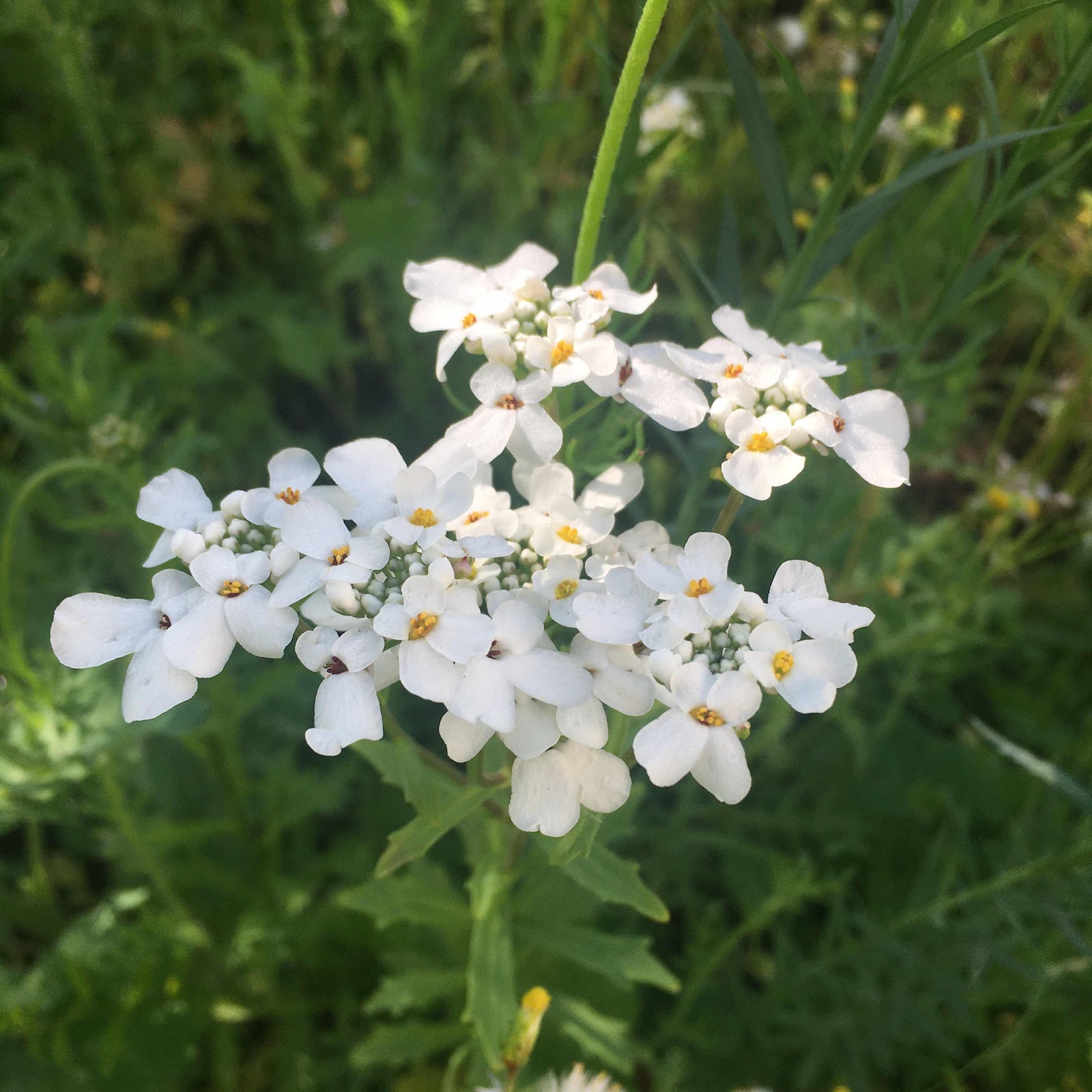 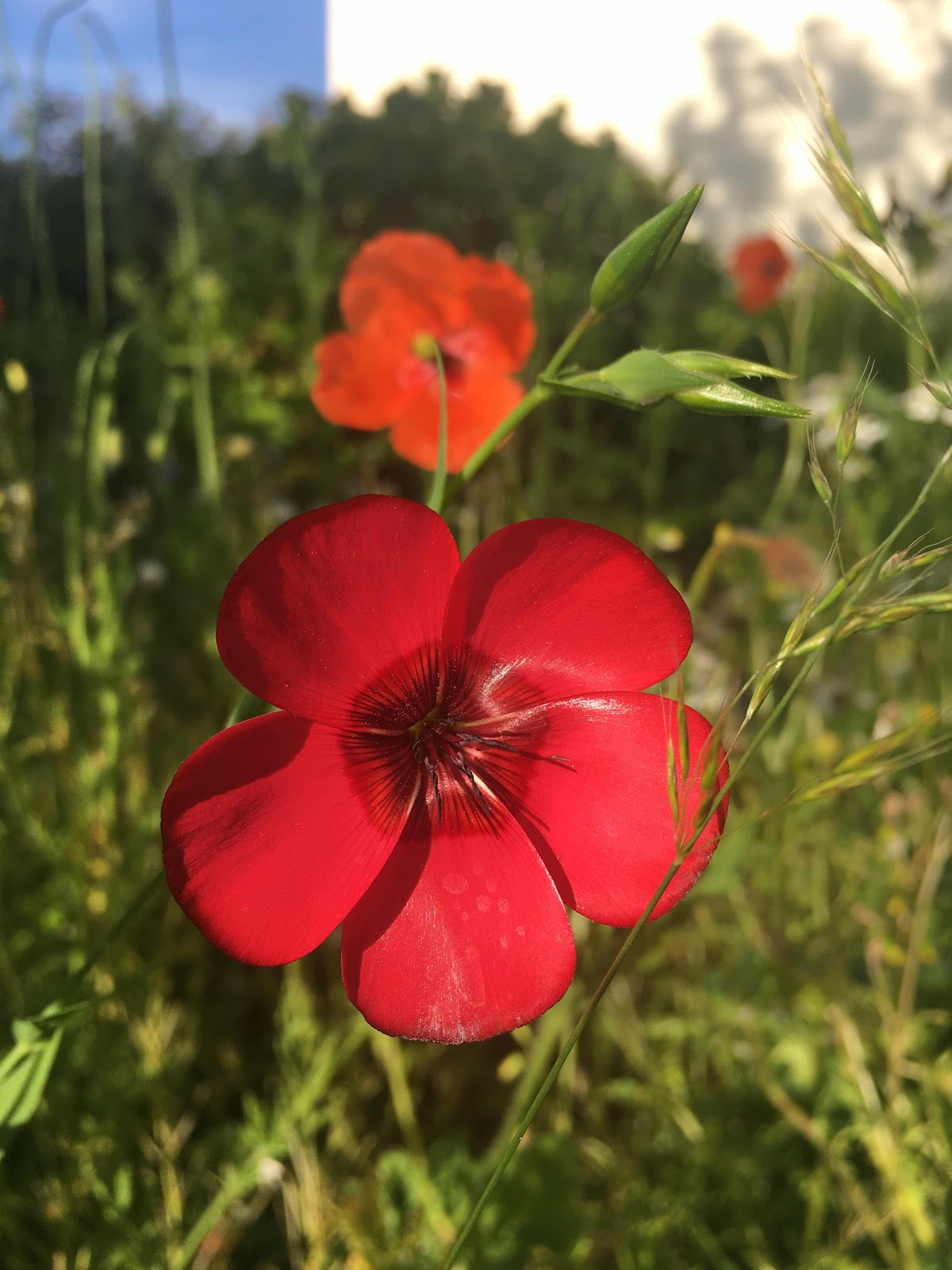 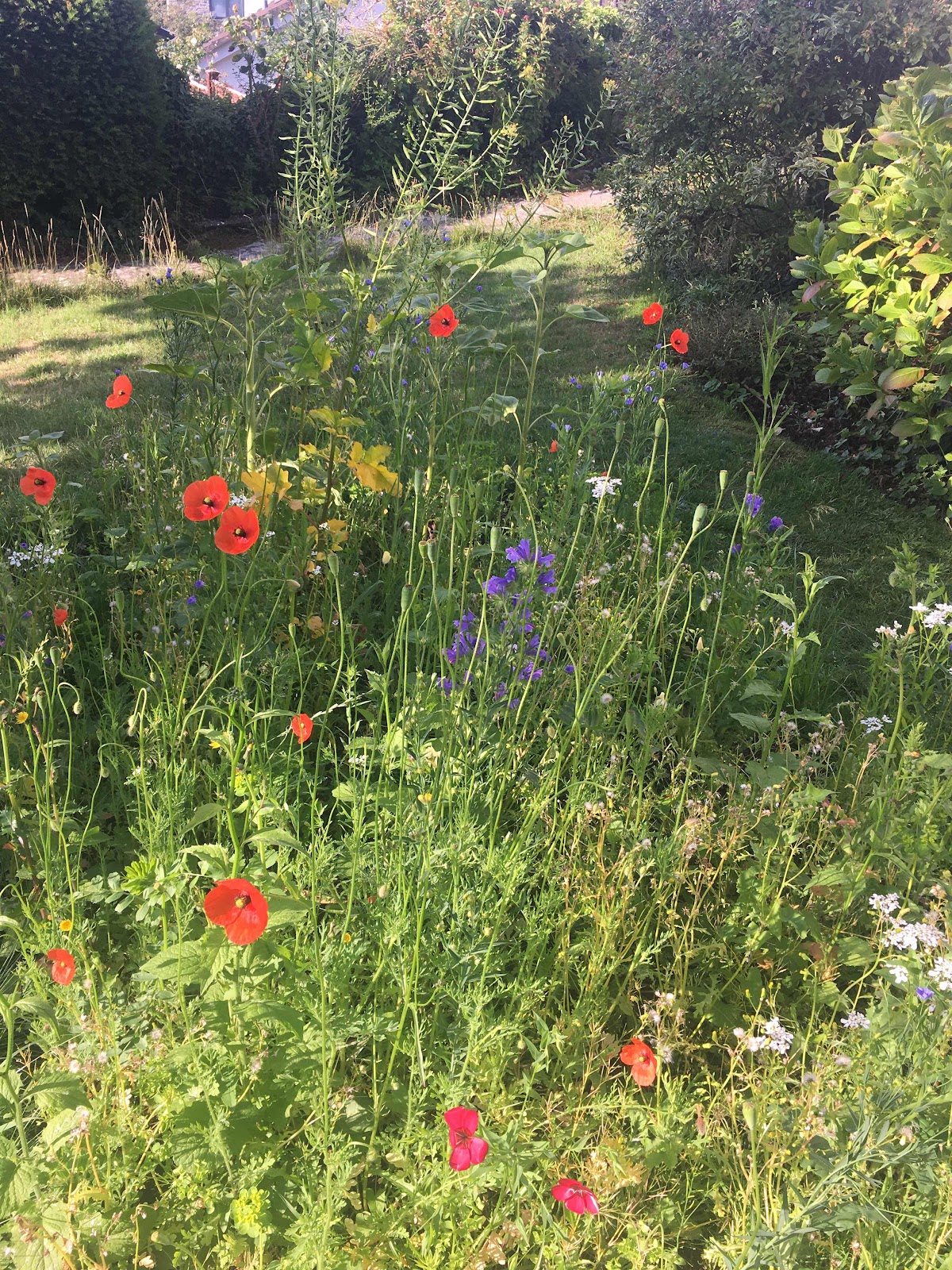 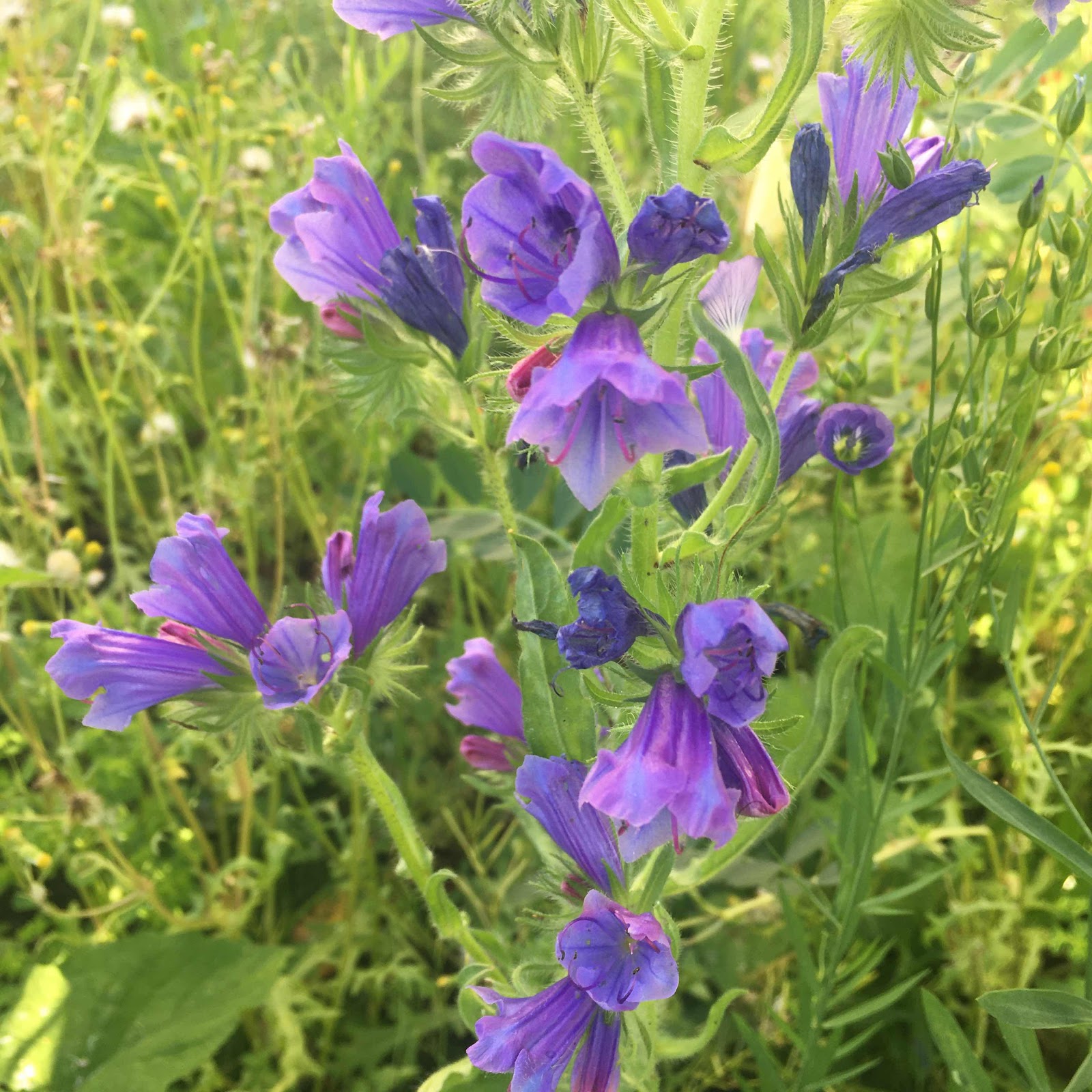 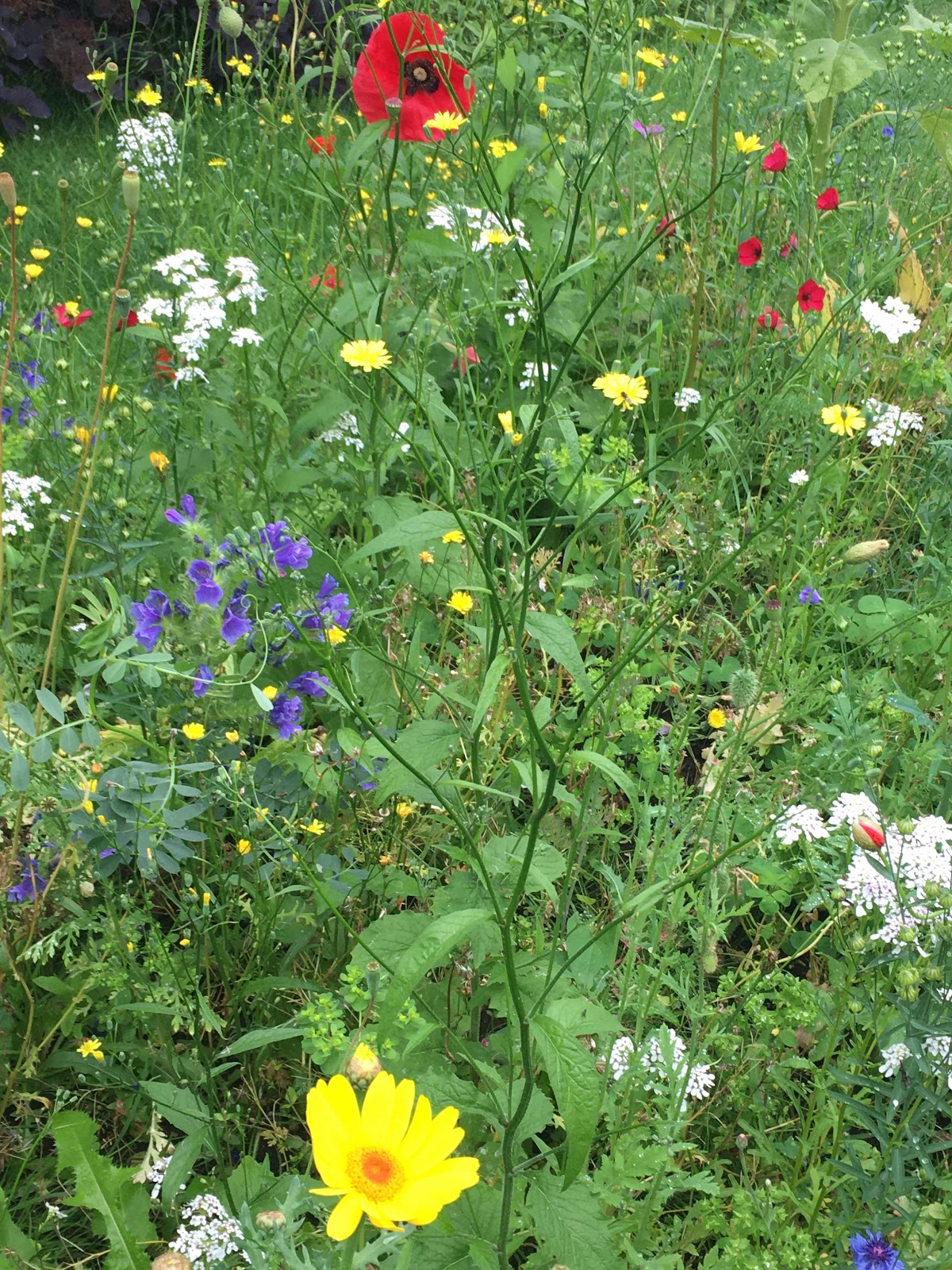