A Library of Lemons, by Jo Cotterill

Now, I have to admit that it's some time since I read A Library of Lemons. As you will have noticed, things have been happening in Britain lately, and like many others, I've suddenly become addicted to news and comment programmes, and to following discussions on Facebook - some of which, I may say, have become very heated: and not just the ones about Brexit and the turmoil in the Labour Party. Somehow, the whole tenor of discourse seems to have become more extreme: people are becoming more angry, less kind. It's all very worrying.

I've also been away a fair bit, and will probably post about some aspects of my travels as time goes on. But for now - A Library of Lemons. This is a VERY GOOD BOOK. I will admit that Jo Cotterill is a friend - when you're a children's writer, you tend to get to know other children's writers. But I wouldn't be writing about it if I didn't think it was good - not just good, in fact, but special. 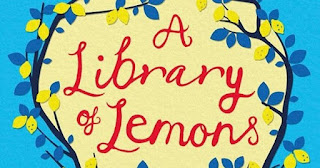 Special in what way? Well, it's a contemporary story about a girl who loves reading and writing - Calypso. Since her mother died, her father has taken refuge in keeping Calypso - and life - at a distance. He is wrapped up in the book he is writing - about lemons - to the extent that he often forgets about minor details like shopping for food. Calypso follows his example by keeping herself separate from her classmates; anyway, her life is so different from theirs that this isn't such a difficult thing to do.

Then a new girl arrives at school - Mae. She is warm and friendly, and she makes it clear that she wants to be Calypso's friend. She too loves writing: the girls bond, and Calypso finds her reserve melting when she meets Mae's family - particularly her mother, who welcomes Calypso with warmth and generosity.

Well, of course things go wrong. But they don't go wrong in an obvious way. For instance, a well-trodden path would have been for Mae to get bored with Calypso, and become tempted away by other, more popular girls. But what happens is far more subtle than that. Somehow, there's real truth in how Jo writes - she doesn't choose the obvious option. One of the exciting things about reading is that sometimes, you read a sentence or a paragraph and you think: 'Yes! I've felt like that, but I never put it into words - in fact I'd forgotten about it, but now I see that's just how it was'. And this happens over and over again with this book. Pretty much at random, here's an example.

...Mae and I... it feels strange to say 'Mae and I', even in my head... we had a conversation. And then it broke. Did I break it? I don't know. Sometimes the rules of conversation are too hard to work out. It's easier to stay silent, or alone.

'Sometimes the rules of conversation are too hard to work out.' That sort of brings me back to where I started...


PS By a funny sort of coincidence, another friend has written a book about lemons which is probably exactly the book that Calypso's father was trying to write. It's The Land Where Lemons Grow, by Helena Attlee, and it's a lovely book, rich with stories about every kind of citrus fruit you've ever heard of and lots you haven't!
Posted by Sue Purkiss at 11:42:00 No comments:

Email ThisBlogThis!Share to TwitterShare to FacebookShare to Pinterest
Labels: A Library Of Lemons, Helena Attlee

You really couldn't make it up...

Yesterday, I watched Theresa May making her first speech as Britain's new prime minister. What she said was unexpected: she talked about unity - about bringing people together and healing divisions. It all sounded rather good, and for the first time since the referendum result three weeks ago, I allowed myself to feel a little bit of hope that perhaps there might be just a tiny glimmer of light on the horizon.

And then, an hour or so later, she appointed Boris Johnson as Foreign Minister. Here he is. 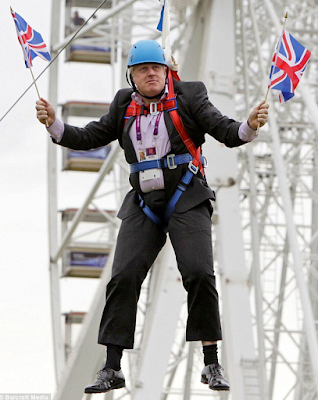 And here's a link to some of the reactions to this news.

This is the man who employed his considerable gifts of persuasion to persuade the British people into voting to leave the European Union - in, it would appear, a cynical attempt to further his own career. This is the man who walked away when, against his expectation, he succeeded, and it all started to look a bit too difficult. This is the man who has unforgivably insulted world leaders, including Barack Obama, and who has never run a Government department.

So that's it. I've had it. Life in Britain has become so much stranger - and not in a good way - than fiction, that if a talking animal or boy wizard walked in through the door right now, I wouldn't raise an eyebrow. Back to books it is.