The Essex Serpent, by Sarah Perry

Apologies - it's been a while since I've posted a review. This is partly because I've been busy doing other things - but mostly because I haven't read anything lately that's really blown me away. So if you have, do please tell me in the comments.

That's not to say I haven't read some good books. The Essex Serpent, by Sarah Perry, is a very good book. But somehow, it didn't quite seize my imagination. It's probably just me; maybe I haven't read it at the right time - because there's no doubt that it's absolutely beautifully written, and it's won some seriously impressive prizes. Perhaps it's a book you should read in the winter, in an isolated house, by a cosy fire, with the mist curling round outside and just the occasional lonely cry of a seabird.

As you may guess from this, it's set mostly on the Essex coast - a particularly liminal area, because it's not only at the boundary of land and sea, but there's also that shifting middle ground of marshland (as there was in Elly Griffith's very different books, the Ruth Galloway mysteries). It's the perfect setting for a story with an uncertainty at its heart - is the Essex serpent, a mysterious and possibly lethal sea creature, real, or merely a product of over-active imaginations? No-one is quite sure. The heroine, Cora Seaborne, certainly wants it to be real; she wants it to be an undiscovered species which she will identify so that she can then take her place alongside Mary Anning, the fossil-hunter, as an eminent woman of science.

Set in Victorian times, it has the flavour of a gothic romance. But the characters have a contemporary liveliness and individuality - they won't be pigeonholed. So Cora, though clearly a strong and independent woman has, after the death of her husband, emerged from an abusive relationship. She has an uncomfortable relationship with her son, Francis, who seems to be on the autistic spectrum; her friend, Martha, is socially and politically active and believes marriage to be a patriarchal straitjacket. (You'll see that though the setting is Victorian, the concerns are modern.)

After her husband's funeral, Cora goes to Essex to hunt for fossils. There she meets a vicar, William Ransome, and his lovely but fragile wife, Stella. She has a friend, Luke Garrett, who's in love with her, and he has a friend, Spencer, who - well, you'll just have to read it. The story of the serpent undulates through it, but it's not really the main point: the heart of the novel is the collection of strong, distinctive personalities: the way they interract with each other, and their strivings to find a way to live which is meaningful, which makes sense of their lives. There are no simple answers for any of them, no pat solutions - and I like that.

So why would I give it 4.5 instead of 5? Maybe it's just because, like Cora, I would have liked the serpent to be real. Which is silly, because it's not that kind of book.

Email ThisBlogThis!Share to TwitterShare to FacebookShare to Pinterest
Labels: The Essex Serpent

The picture I didn't take.

A couple of days ago, I did my usual walk with Nessie up on the hill - up through the wood, then along a tunnel-like little path and out into the open, with a panoramic view stretching round from Glastonbury in the east to the reservoir and the distant coast in the west.

But for some reason this time, I glanced up to the right as I came out onto the hill - and there were two roe deer, a stag and a hind, not that far away. Nessie didn't notice - she was too busy watching the ball in my hand, willing me to throw it. They saw me too; the stag raised its head and watched me calmly. Neither of them seemed disturbed, and I stood still and gazed.

As it was, we stood and stared at each other for several minutes. The hind moved about, feeding; the stag seemed relaxed, but watchful. In the end, I was the one who decided it was time to go.

If I'd got a good picture, I would have been pleased. But actually I'm glad I didn't have my camera, because I saw far more without one - and more than that, there was a sense of just being three creatures in a landscape - a fine thread of shared awareness.

As I went on, I thought about why it is I have this compulsion to capture a fleeting image. I thought of Louis MacNeice's poem, Sunlight on the Garden:

The sunlight on the garden
Hardens and grows cold,
We cannot cage the minute
Within its nets of gold.

But I still keep doing just that - seeking to cage that minute. As you see. 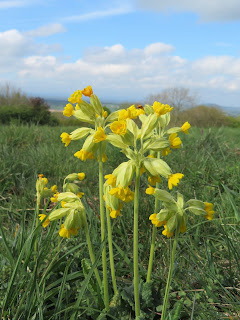