I am truly in awe of the enormous amount of research that went into the making of this book. It's about the lives of women in Paris during, just before, and just after the Second World War. It's surely true that up until recently, the narrative of the war has largely concerned itself with men - for understandable reasons, but still: that means that there are a lot of untold stories about women's lives in the war that have yet to emerge. Anne Sebba brings an astonishing variety of these stories out into the open. 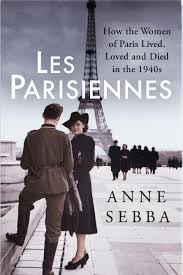 There are some particularly interesting issues around her choice of France - and in particular Paris - as the setting for her book. Britain was not occupied: France was. For everyone living under the occupation, there must have been choices to be made, compromises to create, accommodations to be decided on. Put simply, did you keep your head down for the sake of your family and try as far as possible to avoid trouble - or did you 'take arms against a sea of troubles' - and resist? It could not have been an easy choice.

Paris in the thirties, as it's described at the beginning of the book, was a hub which drew in people from all over the world who wanted to experience its culture, its art world, its lifestyle. Many of them found themselves caught up in something very different when the Germans invaded, and they reacted in different ways. Coco Chanel took a German lover. The Duke and Duchess of Windsor eventually left when it looked as if life was going to become less luxurious than they were used to. It must have seemed unbelievable that such a cosmopolitan city could ever come under the yoke of the Nazis. But after the initial shock, Paris set its chic little hat straight, squared its shoulders and carried on, as far as possible, in the way that it always had. It helped that the Germans had a sort of reverence for the city: they didn't want to destroy it, they wanted to enjoy it.

And a lot of women made the pragmatic decision to help them enjoy it. Some danced with the handsome German officers, sang for them, slept with them, fell in love with them.

But others took a different route, and as the book goes on, the focus shifts to the many young women who played a huge part in setting up and running escape routes and resistance networks - women such as Genevieve de Gaulle, the niece of Charles de Gaulle. She worked on an underground anti-Nazi newspaper: she was captured and sent to Ravensbruck concentration camp. She survived and returned - but only just.

Of course the bulk of the women who were sent to Ravensbruck and other camps were Jews, and only a tiny percentage of them survived. There is a photo in the book of one of the Rothschild, beautiful, poised, expensively dressed: how could this woman have ever imagined the state to which she would be reduced in the hell of the camps?

Anne Sebba also explores - through interviews as well as documentary research - the story of what life was like for the few who survived and returned.

After the war, the Parisians wanted to party and then to move on. Too awkward to delve into who did what during the occupation, once the initial denunciations - often of women who had slept with the enemy - were over. They didn't know what to make of these women who had returned from hell, skeletal thin, malnourished and ill, with harrowing tales to tell of their treatment. Many of them came home to find their families dead, their homes and livelihoods gone. And too often, Paris shrugged its shoulders and forgot about them. Anne Sebba puts that right.
Posted by Sue Purkiss at 16:32:00 2 comments: