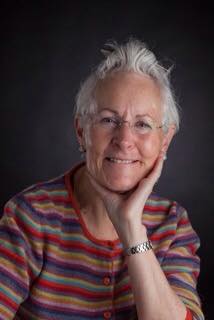 Really thrilled to find out this morning that Vivian French has been awarded an MBE in recognition of her services to literature, literacy, illustration and the arts.

I first met Viv at the end of the 90s, when I was doing a part time course in creative writing at Bristol University in the Department of Continuing Education. Viv taught the segment on children's writing - well, it was actually only half a segment.

I hadn't thought about doing children's writing. Although I was doing some educational writing, I wasn't expecting to be able to write any kind of fiction and get it published; I just wanted to learn how to do it better. But Viv was enormously encouraging and enthusiastic about a short story that I wrote, and she made me think I could do it - and so, in the end, I did. It was also through Viv that I found my lovely agent, Lindsey Fraser.

So I owe her an enormous amount. Getting that first book published, and all it led to, has enriched my life enormously, and I'm sure I'm only one of thousands who have benefitted from Viv's infectious enthusiasm and generosity. She was such a good teacher - we all learned so much from her, both about writing itself and about the business; she was inspiring but also very practical - and very funny. I've seen her doing a workshop with children, too - brilliant: they loved her.

I just heard on the news that there's controversy already about whether a certain political adviser deserves the honour he's been given. Well, I don't know about that. But with Viv, they've awarded an honour that is utterly and absolutely deserved. Congratulations, Ma'am! (Or should that be Master?)

And the sun's shining. So at least two excellent reasons to feel cheerful this morning.
Posted by Sue Purkiss at 09:03:00 3 comments:

So here I was, at Buckingham Palace.....

To find out what I was doing there, take a look here. 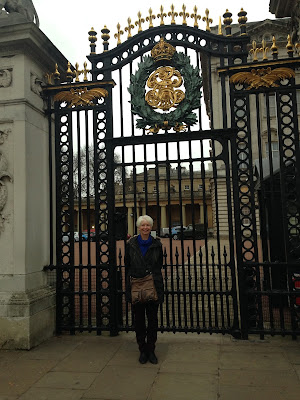 News from the hill

I first had the idea for this blog when I was walking our old dog, Jessie, on the hill where we live. I took her up there most days, and I found it was a wonderful way to let my mind range free and think about writing - a good deal - but about other things, too.

Jessie was a wonderful dog. Her mum was a border collie. We didn't know about dad, but going by the way she looked, we think he was probably a long-haired retriever. Here she is in the Lake District, looking very noble! 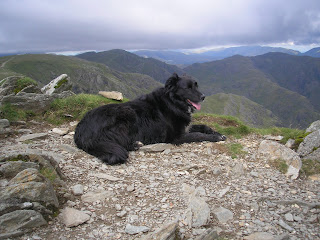 After she died two years ago, I thought I would still walk up on the hill, and I did from time to time, but not very often. It wasn't the same without a dog; we missed Jessie terribly.

We weren't sure whether to have another one. But then we met a couple called Pete and Caz, who had a really delightful white-and-tan collie called Skye - and they said they were hoping to breed from her. So we decided that if Skye did have puppies, we'd have one; if she didn't, we'd leave it. 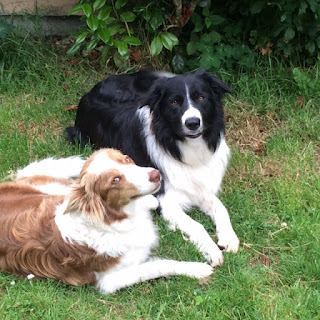 And on the first of September, the puppies were born. Ours, Nessie, is at the bottom of the picture, with a black spot between her ears. We called her Nessie as we wanted a Scottish connection, because of Skye; we went though lots of Scottish islands, but though lovely, none of the names seemed quite right for everyday use, and then our daughter, Katie, came up with Ness. 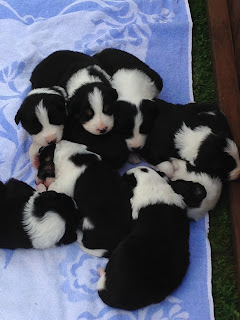 We've had her for just over a month now. We had to wait till she'd had her second lot of vaccinations to take her for walks, but now, at last, we can. They have to be fairly short to start off with, but soon she'll have full possession of the hill (which is called Roundhouse, for reasons I'll explain at some stage). She hasn't been to the top yet, but we're getting closer every day. Here's the view she would see on a misty morning - if she looked up, which usually she doesn't, because the smells on the ground are far too enticing! 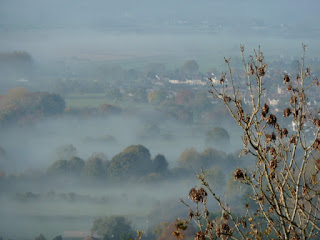 Or if it's a clearer day, a bit further round to the south: 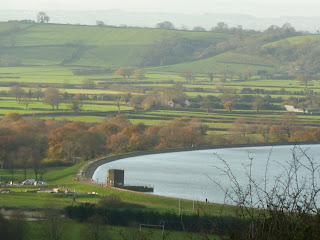 And here's Nessie as she is now. She's full of energy, she chews anything she can get hold of, and she's quite adorable! 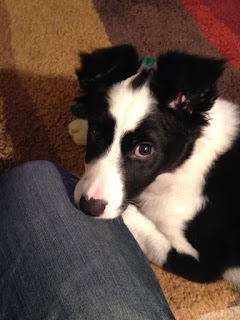