The Island of Missing Trees, by Elif Shafak

I first came across Elif Shafak when I was listening to an online talk last year from the Hay Festival. She was on a panel with Philippe Sands, a writer I very much admire: partly because he is a human rights lawyer as well as an author. He's an engaging speaker as well - as was Elif Shafak, who impressed by her intelligence and composure. She also happens to be very beautiful, which isn't relevant to her writing, but is too obvious not to comment on. 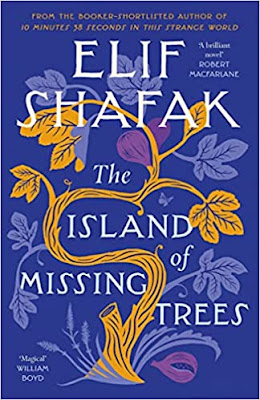 Originally from Turkey but now living in England, she mentions in her acknowledgements that when she left Istanbul many years ago, she didn't realise that it was for the last time. So she knows what it means to be an exile from her home country. And that is one of the things this book is about - though there are many more.

At the centre of the story are two lovers, Defne and Kostas. Defne is a Turkish Cypriot, Kostas a Greek one, and they fall in love in 1974, just before civil war breaks out on the island. We only find out gradually what happens to them; the story unfurls over three time periods, 1974, the early 2000s, and the late 2010s. In this latter period, the viewpoint character is Ada, the couple's daughter - who knows little of their past, but is devastated by her mother's recent death, and does not understand why none of their relatives have reached out to her. But then her aunt arrives on the doorstep, and gradually the secrets of the past come out of hiding.

So it's about civil war, and the impact of the past on the present, and about the different agonies of those who leave and those who stay: it's about memory, and love, and growing up. It's also about trees. In fact a fig-tree is one of the main characters: it gradually reveals much of the story, which it gleans from the creatures which visit it - ants, butterflies, a mosquito, a bee. Kostas, a gentle man, studies insects and trees, and we learn how trees can help each other and defend themselves, and how interdependent all forms of life are.

It's a wonderful, magical book. The story is engrossing, but there's so much else to the book as well as the central tale, and the magic is the natural magic of the earth. I like the world this author has created, and I'm very happy to see that she has written many more books, which I look forward to exploring.