Some years ago, I was thinking about writing a book for children which would involve time travel back to significant points in the history of Britain. The first place I planned to head off to was the cottage where Alfred the Great burnt some cakes. (The story goes that Alfred, the only king left standing in the England of 878, had fled from the Danes ans was hiding in a peasant's hut in some marshes, gloomily contemplating his woes. The peasant's wife, unaware of the true identity of her guest, asked him to keep an eye on some cakes she was baking; he, sunk in misery, forgot about them, and when the good lady returned, she found them burnt. She was cross.)

I discovered that Athelney, where this incident took place, was not far from where I live. I went along there and was bewitched by the atmosphere of the place; it's still marshy, (it was where the famous floods were on the Somerset Levels, two years ago) and remote, haunted by the cries of water birds. The ninth century seemed almost within reach as I gazed out towards Glastonbury Tor.

Anyway, more of that another time - but I was hooked. I plunged into researching the story of Alfred the Great, discovering what an unusual and enlightened leader he was during that dark time. I began to write a book - this book. 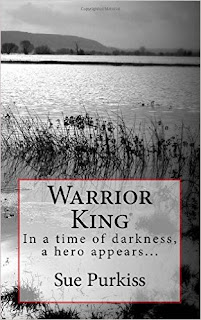 But somewhere along the way, I discovered that Bernard Cornwell had also become interested in Alfred - who was a very popular figure in Victorian times but is relatively unknown now. (King Arthur is far more famous, and he wasn't even real. Or not very.) Cornwell was way ahead of me; the first book in his series, The Last Kingdom, came out while I was still writing mine. Plus, he is better known than me by a factor of about a million and one.

I decided not to read his book, for obvious reasons, and I never have. But now it's been televised, and the first programme was on last night. It's been marketed as the BBC's answer to A Game of Thrones, and that makes sense, because George Martin's saga clearly draws heavily on Viking and Dark Age tropes. I've been looking forward to it immensely, and it didn't disappoint.

So far, Alfred - my hero - has been mentioned but he hasn't appeared. In Cornwell's story, the hero is Uhtred, the heir to a Saxon nobleman in Northumberland who is killed in battle by the Vikings. Uhtred is captured by  a Viking called Ragnar, and eventually becomes part of his family.

The battle scenes are visceral, so much so that there were frequent moments where those of us watching flinched and covered our eyes protectively. I won't go into detail because some of you won't have seen it yet - but there was a particularly unpleasant incident involving an eye... So far, it hasn't reached the territory of my novel, but Wessex - and Alfred - is foreshadowed. A priest whispers to Uhtred that for his own safety he must flee, not from Ragnar but from his own uncle; and he should go to seek out Alfred and Wessex - the 'last kingdom' of the title. And one of the Viking leaders speaks greedily of Wessex, as the greatest prize of all. This same priest also lectures Uhtred as to the importance of reading and writing - if something is written down, he says, it becomes a truth that cannot be tampered with. Another marker is laid down; education was one of Alfred's great concerns.

I was fascinated by all this - the interweaving of history and fiction, the careful structure of the plot - but it also stuck me how much the visual medium brings to the story. There are moments which are clearly intended to be iconic, and will probably become so; the one where Uhtred the child is plunged into a stream, and emerges as a man, and rather a beautiful one at that, And the one where Ragnar rides up to the Saxon fortress completely wrapped in a massive cloak. (Made out of what? Furs? Feathers? Whatever, it's extremely stylish.) He slowly unfolds it, and holds aloft the head of the young heir: an action which is mirrored at the end in different circumstances. 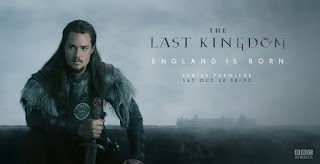 But what are they going to make of Alfred? Well, I'm very interested to find out. A story can't have two heroes, and Uhtred is clearly the hero and a half of this one. So what role is my hero going to play? Well, I'll certainly be watching to find out.

A question of Good and Evil - or, 'Muddle and Win', by John Dickinson 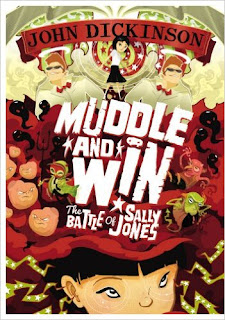 I recently met John Dickinson at a writers' conference, henceforth to be referred to as Charney. All sorts of things took place at this conference, including serious (well, not very) writers masquerading as Tudor market traders, innkeepers and thieves; a savage and snarling quiz, a great deal of talking and eating; and one of the most effective and funny talks I've ever listened to. This last was given by John Dickinson*. It was on the not-obviously-riveting topic of publishing and finance, and it was brilliant.

Another thing we do at Charney is that we take some of our books with us, and swap them or buy them or - if we're very desperate - bribe people to take them away. Curious, I looked at John's books, to see what kind of thing someone so clever and so funny would be writing. Not surprisingly, the answer was - something very clever and funny. Muddle and Win, in fact.

There were other books by him for older children, and they looked good too. But I liked the format of this one. It was a hardback, smaller than the average size, with nice cream paper and a beautifully clear font. Just right, somehow.

Now, you need to know what it's about. It's not all that easy to say. The battle between good and evil? Well, yes, but so's Paradise Lost, and it's not much like that. A cross between Terry Pratchett, Horrid Henry, and that new Disney film called Inside Out? Hm, that's closer. It has the comic fantasy of Pratchett, it has - like HH - a perfectly horrid character and an annoyingly virtuous character, and a lot of the action takes place inside a character's head. By that, I mean it actually takes place; we aren't talking about thoughts here, we're talking about a rather dear little devil called Muddle, and a very cool guardian angel called Windleberry, who are fighting it out for the soul of the practically perfect Sally Jones - inside the complex, beautiful and well-ordered chambers that make up her mind. The consequences for either of them of losing will be dire, so the stakes are high.

And the resolution involves muffins.

I don't think I can put it any more clearly than that. It's witty, it's funny, it's beautifully written, and it's full of characters such as you'd meet almost nowhere else. Here's a little taster: introducing Windleberry, guardian angel and celestial super-agent.

He had served in every heavenly department and was thorough in everything he did. Other angels marked the sparrow's fall, but Windleberry gave it marks out of ten, and made it fall again if it scored less than three. Other angels counted the hairs on a human's head, but Windleberry clipped a tiny numbered label to each one and offered them round for sponsorship... He never carped, he never questioned, he never came back to complain about how difficult it was...The only thing with Windleberry was that you had to remember to shout 'stop'.

'O the opal and the sapphire of that wandering western sea...' *

Have been in Cornwall, by the sea - which was magical. Normal service will be resumed soon: in the meantime, let's go down to the beach... 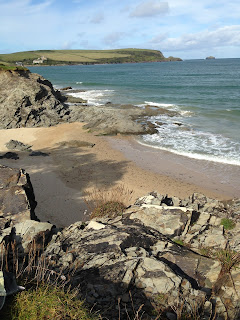 This is just north of Padstow. Very delicious pasties were eaten, from Chough's Bakery. 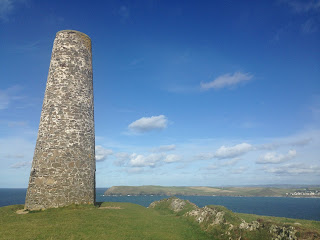 This tower, Stepper Point, was built as a 'day mark', to guide navigators. On the other side of the Camel Estuary you can just see Polzeath and the nearby cliffs, where the next few pictures were taken. 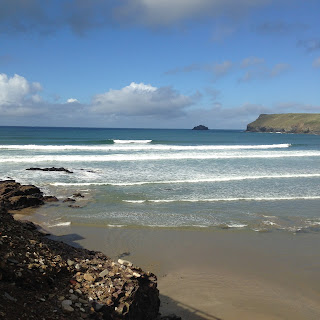 Polzeath. The sky had just cleared after rain, and the colours glowed. 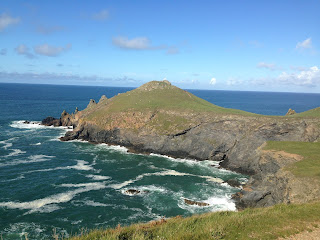 This headland looked just like a dragon, with its head resting in the sea, and spines jutting up from its neck. 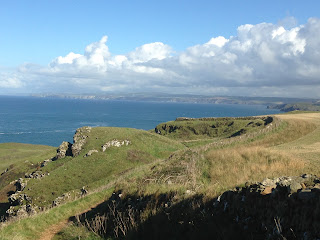 In the distance, in the picture above, is Tintagel, where Uther Pendragon used trickery and Merlin's magic to sleep with Igraine, Queen of Cornwall. The subsequent child became King Arthur. It's easy to believe in magic in a place like this. 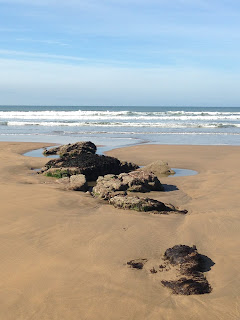 Patterns in the sand. I'm tempted to say the sands of time, but I think that might be a bit over the top. 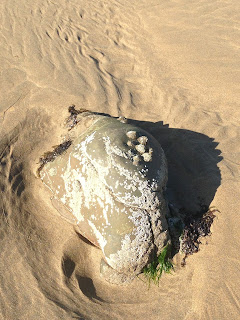 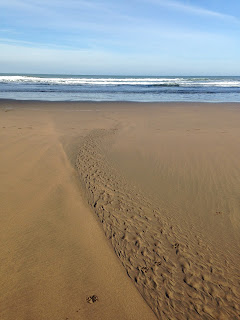 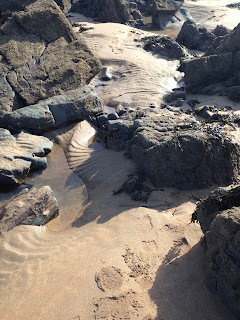 * This is from Beeny Cliff, by Thomas Hardy. He met his first wife, Emma Gifford, in Cornwall, and wrote beautiful poems about her and about this landscape years later after she died, in an outpouring of regret and remorse because he hadn't been nicer to her in their later years. I wish they'd been happier - but it would be very sad not to have the poems.
Posted by Sue Purkiss at 17:56:00 4 comments: