The Girl In The Broken Mirror, by Savita Kalhan

This is a riveting read, though not a comfortable one: indeed, how could it be in any way comfortable when at the heart of it is a brutal rape? 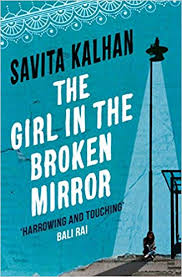 It tells the story of Jay, a fifteen year old girl born in England but from an Indian family. Up until she is eleven, she has a comfortable, happy life: her father,who has wholeheartedly embraced English life, has a successful business, and she goes to a private school. But then her father wraps his car round a tree, and they discover after his death that his business has failed and he has lost everything.

The story demonstrates very clearly how thin is the barrier between relative wealth and poverty. Jay and her mother move to a tiny flat above a grocer's. Jay moves from her private school to a comprehensive and works part time in the shop: her mother has two jobs and studies part-time to train as a teacher, which she hopes will be their way out of their situation. Jay has a plan too: she is studying hard, in the hope of getting a scholarship to a university, and then a good job. And she has two very good friends, Chloe and Matt - who is just becoming more than a friend.

But then the grocer decides to sell his shop, and Jay's mother tells her that they are to move in with Uncle Bal and Auntie Vimala. Uncle Bal is a kindly man, but he is dominated by his horrible wife, who is a more traditional Indian - and uses this as an excuse to demand that Jay and her mother act as pretty much unpaid servants in the house. Thay have two sons, gentle Ash, who is still at home, and Deven, a very unpleasant university student who is the apple of his mother's eye.

At the beginning of the book, Jay is just waking up in the aftermath of the rape. The writing is powerful and visceral, and Savita Kalhan, absolutely makes us understand why Jay feels she is filthy and spoiled, and that all she can think of doing - once she has scrubbed herself with bleach in a vain attempt to make herself feel clean - is to get as far away from the house as she can. The next section tells us what led up to the rape, and then we learn of its aftermath: of how Jay tries to come back from it, with the help of her friends. This process is not made to seem easy or inevitable: it's painful not only for Jay but for those around her, particularly her mother.

The book demonstrates how difficult it can be to be caught between two cultures. It also shows clearly how hard it is to get out of poverty - and it shows how, apart from these more dramatic difficulties, being a teenager isn't the easiest thing either. Savita Kalhan is not afraid to confront things that it would be easier to avoid, and because she writes so well and creates such very real characters, she puts the reader right in the middle of some very distressing experiences. Yet ultimately she offers hope, and shows that generosity and kindness are to be found more often than brutality and arrogance, and will, in the end, triumph.

The Truth About Archie And Pye, by Jonathan Pinnock 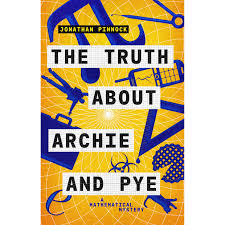 As it says on the cover, this is a mathematical mystery. But don't be frightened. I'm utterly useless at maths, but I managed!

It's about a hapless (and useless) PR man who loses his job at the beginning of the book. On the train on his way back from the incident which causes the job loss, he happens to meet a writer called Burgess, who somehow leaves behind a suitcase. Tom picks it up, meaning to return it - but finds that the writer has been murdered. Thus begins a hilarious chain of unfortunate events, during the course of which Tom loses his partner, his home, and very nearly his life. It really shouldn't be funny, but it is - very. It's a bit like a book I vaguely remember from years ago, called Aberystwyth Mon Amour, by Malcolm Pryce: or in terms of the humour, rather like Father Ted. Tom is hopeless - you can guarantee that if there's a banana skin withing ten miles of him, he'll find it and trip over it. The account of a car chase in which he is driving his partners's 'lovely, little car', and thinks he is being pursued by the Byelorussian mafia (he isn't - then) is brilliant. There's also a well-muscled zumba teacher called Arkady (actually a qualified pathologist back in - you've guessed it - Belarus) who I was particularly fond of, and a game-designer called Ali who is wonderfully single-minded and stroppy. In fact they're such good characters, I'd really like to meet up with them again.

The book is published by Farrago, a new publisher whose mission is to seek out funny books. Well, they've certainly come up with the goods with this one. Perfect for dispersing the November glooms.
Posted by Sue Purkiss at 21:40:00 1 comment: