People of the Book, by Geraldine Brooks

I recently wrote a review over on the History Girls about a book called Caleb's Crossing, by an author I hadn't read before called Geraldine Brooks. In the comments, Michelle Lovric and Sue Bursztynski both recommended another book by her called The People of the Book.

So off I went and ordered it. I'm SO glad I did - and thank you, Michelle and Sue - because I enjoyed it enormously. It was one of those rare books that is so good that you feel bereft when you've finished it. 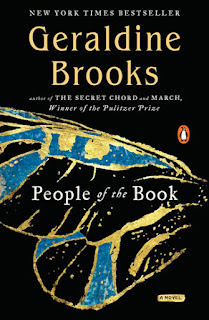 It's about a very precious Jewish book, the Sarajevo Haggadah, which is centuries old and very unusual because, unlike the vast majority of Jewish religious texts, it is beautifully illustrated. A young Australian conservator, Hanna Heath, is asked to examine and restore the book. As she does so, she finds tiny clues - a white hair, a fragment of a butterfly's wing, a salt water stain. She follows each of these clues tenaciously, ad so builds up a picture of the book's journey to Sarajevo - where it has recently been saved in a time of war twice, both times by a Muslim.

Hanna is a prickly character with a lot of emotional baggage, and she has her own story. Into this are woven stories, based on the clues, that reveal the book's past. What is remarkable is firstly that Hanna's own story is as compelling as the flashbacks embedded in it (which I think is quite unusual with this kind of structure) - and secondly that each story has its own highly distinctive voice. None of these, of course, are remotely like the voice used in Caleb's Crossing - yet all of them seem entirely convincing and authentic.

I think this is an extraordinary achievement and a dazzlingly clever novel, and I'm very much looking forward to reading her other books. One, which Sue and a friend of mine have both recommended, is A Year of Wonders. This is about the plague village of Eyam in Derbyshire, which is my home county. I know the story well, and I'll be very interested to see what this remarkable writer does with it.
Posted by Sue Purkiss at 18:08:00 1 comment:

Email ThisBlogThis!Share to TwitterShare to FacebookShare to Pinterest
Labels: Geraldine Brooks, People of the book 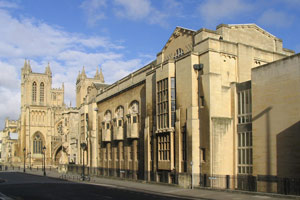 All libraries are full of treasures. But I discovered some particularly unusual ones recently behind the scenes at Bristol Central Library... see An Awfully Big Blog Adventure for more.
Posted by Sue Purkiss at 08:56:00 No comments:

Here's a link to a roundup by author Elizabeth Fremantle of historical fiction coming out in 2016. Lots of treats in store!

The Legacy of Elizabeth Pringle, by Kirsty Wark 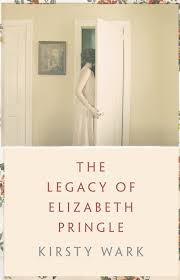 This is a novel by Newsnight presenter Kirsty Wark. It concerns the eponymous Elizabeth, who leaves her house on the Isle of Arran to a stranger; a woman she had glimpsed many years before, pushing her daughter's pushchair along the road outside. This woman, Anna Morrison, had fallen in love with the house and written to Elizabeth asking her to get in touch if she ever thought of selling it. Long afterwards, Elizabeth, apparently on a whim, and without telling anyone other than a lawyer of her decision, decides to bequeath the house to Anna.

By now, Anna has dementia and it falls to her daughter Martha to take on the house. Martha, a globe-trotting journalist, is ready for a change in her way of life, and she goes to the island, which she remembers and loves from holidays with her mother, to whom she is extremely close. She becomes fascinated by what she finds out about Elizabeth, and she finds herself becoming part of the life of the island - and in particular, of the lives of Catriona, who runs a hotel, her brother Niall, a botanist/horticulturalist, and Saul, an unconventional American Buddhist. Saul and Niall had both been very fond of Elizabeth in her later years.

There are some things that don't quite work. The motivation of some of the characters is a little hazy, and some things are set in motion which don't really develop, mostly to do with the character of Saul. And Susie, Anna's sister, veers about a bit - more than she's meant to, I think, in terms of her character and the plot. Everything falls into place for Martha a little too neatly. And I'm not absolutely sure about what is discovered at the end - I won't explain that, because it would spoil the story for you.

But all in all, I found it really captivating. The evocation of the place, of Arran, is just wonderful, as are the descriptions of the various gardens and houses. And the story of Elizabeth herself is hugely touching - you so long for her to be happy. And in fact she does have spells of extreme happiness, and you see that although she has what might be judged to be a quiet, uneventful life, it is nevertheless a fulfilled, creative, and largely contented one.

Incidentally, the way I came across it is quite odd. I teach a writing class, and one week some time ago, I chose a list of titles of books I knew nothing about, and asked each person to pick one and outline what they thought the plot might be. Heather chose this title, and she was so intrigued by it that she bought the book. It's now doing the rounds, and it was my turn yesterday. I had finished it by this afternoon, and it's quite long, so that probably tells you all you need to know about how much I enjoyed it.

Right, off to do those things which I ought to have done now - starting off with walking the dog...
Posted by Sue Purkiss at 15:26:00 2 comments:

Email ThisBlogThis!Share to TwitterShare to FacebookShare to Pinterest
Labels: Kirsty Wark, The Legacy of Elizabeth Pringle 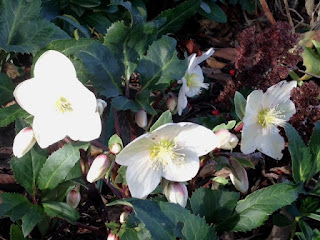 My mother loved Christmas roses, and she always looked for a few to pick at this time of year. She gave me a plant several times, but somehow they never thrived in my garden.

But the other day, I was poking about tidying up a border, and I found these, hidden behind another plant. I haven't picked any, because the stems are too short, and anyway I think they'll last longer outside.

Sometimes things grow, even when you don't expect them to.