This book has absolutely rightly done really well, so probably lots of you have read it already. And I can’t say mouth about it because it would spoil its unexpectedness. But I’ve just finished it so I want to acknowledge it and say how much I enjoyed it.

It’s about a young woman who at the beginning of the book has very little in her life, and is convinced that’s how she likes it. She lives alone, has a job she tolerates with people who puzzle her, and can only get through the weekends by drinking copious amounts of vodka alone in her flat. But gradually things begin to change, and we find out, bit by bit, why she is in this state.

It’s sad, shocking, but also very funny. I feel better for having read it.
Posted by Sue Purkiss at 08:01:00 5 comments: 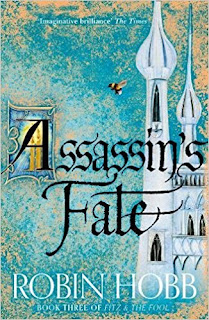 First, let's just take a look at the cover. Isn't it perfectly luscious? It's by Jackie Morris, who recently collaborated with Robert MacFarlane on a beautiful book called Lost Words, which seeks to reclaim - particularly for children - words to do with nature which are apparently no longer widely familiar.

That book is wonderful, but let's get back to this one, which I finished last night. (There were tears, but more of that later.) The bee represents a child called Bee, who has been kidnapped and taken to an island called Clerres, whose white stronghold is also pictured. If you look closely, you'll see in the decoration of the letter 'A' two candles; Bee carries with her a candle, broken into two, which was made by her mother, now dead. She dreams about candles too, and about lots of other things. This dreaming is important, and it's part of the reason she's been kidnapped.

It's a very fat book, and it's the last in a very long series, which features Bee's father, Fitz, and his 'friend' (it's not the right word, but it's difficult to really explain their relationship without telling too much of the story), the Fool. It's fantasy, and I don't often read fantasy (although some of my favourite books in the past have been fantasy, notably The Lord of the Rings and The Dark Is Rising). I got into this one because several writer friends whose opinions I respect had enthused about it. When I downloaded the first one, I read a few pages and decided I couldn't be bothered to get into this world. Months later, for some reason, I decided to have another go - and I was hooked.

Robin Hobb is a brilliant writer. Not only does she create a complex fantasy world: she peoples it with richly realised characters who you really care about, she tells a story that hooks you in and won't let you go as few people can - and somehow, she keeps all the zillions of narrative threads in her fingers, over thousands upon thousands of pages, and weaves them together with the utmost skill. One example - the first few books concern Fritz and the Fool, and their lives in the Six Duchies. The next sequence deals with an entirely separate country, the Rainwilds, and its neighbours the Bingtown Traders, who possess the extraordinary liveships, which are sentient and have talking, moving figureheads. It's not at all obvious that these two sets of stories are connected, except by virtue of taking place in different parts of the same fantasy world - but in the next sequence, you discover that they are in fact intimately connected. It's just so clever - I have no idea how she manages to keep all those plates spinning.

The way she manages to bring it all together and explain most - not all - of the mysteries, in this last book, is an absolute tour-de-force. And it's so sad at the end - sad because of what happens, but also because you know you're saying goodbye to all of the characters. (Unless - unless - she changes her mind. There are stories still to be told...)

In the meantime, I may just have to go back to the beginning and start all over again.
Posted by Sue Purkiss at 18:08:00 No comments: