The tag line on the cover of this book is:

‘On the Origins of GENOCIDE and CRIMES AGAINST HUMANITY.’

Now, I have a friend who gets restless when talk turns to the two world wars. ‘Why must people keep re-living the past?’ she wonders. ‘Isn’t it time to let it go?’ And my father, who was a prisoner of war from Dunkirk right the way through to 1945, had a similar attitude. When there were programmes around Remembrance Day, he too would ask: ‘Why must we keep remembering? Why can’t we just forget it all?’ 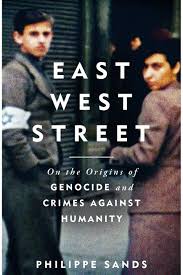 (Dad actually did throw some light on this, when I asked him why it was that a contemporary and good friend of his, in contrast, regularly went to regimental reunions and loved reminiscing about his days in North Africa and then in Italy. ‘Ah,’ said Dad. ‘Well, Harold had a good war. Me, you see, I just had an ordinary war.’)

When I was a child, the Second World War was only a few years in the past. But to me then, it could have been centuries ago. It was gone, over: it belonged to my parents’ generation, not mine – just as the First World War was to do with my grandparents’ generation. To be sure, I thought that when I grew up, there would be probably be another war – that must just be what happened – but being grown-up was a very, very long way off so it wasn’t something I needed to worry about then.
But in recent years I’ve become more and more drawn to books about the Second World War and the lead-up to it, and I’m clearly not alone – there are masses of them, both fiction and non-fiction: what we think we know and understand is being constantly re-evaluated. I think the two big questions that draw me are:
So when I saw the tag line on the front of East West Street, I thought it would be addressing the second of these questions. Well, it doesn’t - or at least, that's not its main purpose. It sets out to do something much more specific. Philippe Sands is an international lawyer, and what he seeks to do is to explore the origins of these two legal concepts: genocide, and crimes against humanity.

He does this by tracing the lives and careers of two of the prosecutors at Nuremberg, where Nazi war criminals were put on trial after the war: Hersch Lauterpacht and Rafael Lemkin. Another significant figure is Hans Frank, Hitler’s personal lawyer and the Governor-General of Nazi-occupied Poland; he was one of the men on trial at Nuremberg in 1946.

There are several strange twists of fate in this story. One is that both prosecutors – who were far from being friends, and seem in fact to have had as little to do with each other as they could manage – came from the same city, which is now known as Lviv and is in the Ukraine, but has changed hands and names several times: in the war it was known as Lemberg. Further, near the end of the trial, the two men – both Jewish – discovered that most of their family members who had remained in the city were dead; and the man who had given the orders which led to their deaths was Frank.

And yet another twist, another thread that binds together the different elements of the story: the author’s own grandfather, Léon Buchholz, was also born in Lemberg/Lviv, at roughly the same time as the two lawyers. Sands knew little of his family’s history. His interest was aroused when, as a human rights lawyer with expertise in cases of mass killings in far too many places, he was asked to deliver a lecture in Lviv. While there, he saw the chance to find out more about his own family. His researches also led him to explore the origins of these new and terrible concepts which had formed the basis for his own career – and the lives of his grandfather’s two compatriots. (Another intriguing twist is that during his research for this book, Sands became good friends with Frank's son.)

It’s an extraordinarily complex narrative, and I found that there were times when I lost the thread and became confused as to which family I was reading about. But it’s fascinating – if challenging – to try to grasp the legal framework which allowed Germany in the thirties to treat (or mistreat) its minorities in whatever way it liked with apparent impunity; part, after all, of one of those questions I asked at the beginning. It doesn’t explain how sane men from a country with a great culture and civilisation could come up with the hideousness of the Final Solution, or how so many others could find it within themselves to carry it out: but it does go some way to explaining how the circumstances arose which made such a thing possible.

I like stories, and I like to look at history through the lives of ordinary people – that’s why I particularly enjoyed Thomas Harding’s book, The House by the Lake. For me, this book followed too many stories and demanded too much close reading: it’s a truly remarkable achievement, but you’ll need to be able to rise to the challenge and be prepared for some serious concentration (or, if you’re a lightweight like me, to be prepared to skip bits!).
Posted by Sue Purkiss at 16:09:00 1 comment: