The lockdown ought to be a really good opportunity to catch up on reading. I'm reading a lot, as I always do: but I'm finding it difficult to find books that I can really get into. Friends are saying similar things; many are retreating to books they remember from childhood, because I guess they take us back to a safer, more innocent time, and because, by definition, if they're favourites they're likely to have offered a gripping read. And a gripping read is certainly what I'm after at the moment. I'd also quite like something soothing, something that offers hope for the future. Some people are drawn towards dystopias and other novels about disasters - Camus' The Plague would be an obvious one - so that, I suppose, they can compare the fictional pandemis to the real one. I don't want to do that. I stopped reading dystopias a long time ago; pictures of a destroyed world peopled only by feral gangs have no appeal for me.

And as an aside - I do find it very heartening that in this current extraordinary situation, although there is bad news in plenty, there are also so many stories of people doing kind things, finding imaginative ways to adapt and to help others. That doesn't usual happen in fictional accounts - things usually turn very nasty very quickly.

But back to finding gripping reads. I haven't had an awful lot of luck with this lately, and have been re-reading. I went back yet again to the comfort reading I've written about elsewhere in this blog, Elly Griffiths' series about Dr Ruth Galloway. That kept me going for a while. Then I reached further back, to a novel by Howard Spring, written in 1946, There Is No Armour. There are some throw-away comments which are uncomfortable for a 21st century reader - he was of his time - but he is a skilful story teller, and he writes beautifully - as in many of his books, his subject is families and relationships, how they develop over time: usually set in Cornwall and Manchester, and rather cleverly weaving in important events of the twentieth century. 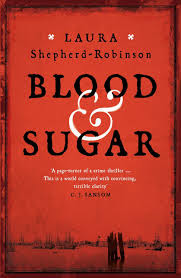 And then someone on Facebook recommended this book, Blood & Sugar. It's by Laura Shepherd Robinson, and unbelievably, it's her first book. It's set in London, mostly in Deptford, at the end of the 18th century, against the background - well, foreground really - of the slave trade and the abolitionist movement. At the beginning, the body of a man is discovered hanging from a hook on the dockside. He has been horribly tortured and he's been branded.

The man is called Thaddeus Archer. Our hero, Harry Corsham, comes into the story when Archer's sister, Amelia, comes to see him, saying that her brother is missing and appealing to him to find him. Amelia points Harry towards Deptford, and he quickly identifies the body as that of his old friend - and determines that he will find his killer.

Harry is one of those leading characters who has you hiding behind the settee as he repeatedly forces his way into danger, fearlessly asking questions and barging in where he's clearly not wanted. 'Just stop it,' you groan. 'Go home! No - don't go there! Are you crazy?' But he doesn't take any notice. On he goes, putting his livelihood and his (admittedly rather odd) marriage at risk, because he simply will not give up. He's made a promise to his dead friend, and he's determined to keep it: even more so as his enquiries bring him face to face with the horrors of slavery. The author spares us nothing here. She makes us face up to the realities of this hideous trade, through the stories of individuals as well as through the central, appalling event around which the story hinges: and though poignant details, such as the blacksmith who has openly for sale iron slave collars to fit the neck of a four year-old child. It's almost unbearable.

The characters are complex. No-one is quite how they seem when we first meet them. Layer after layer is stripped away from them as we learn what forces have shaped them, so that in the end, we feel, if not sympathy, at least some level of understanding of even the cruellest villains. The historical background is handled with great confidence and expertise. (I've just discovered that the author is the daughter of Tony Robinson, of Blackadder and Time Team fame - so I guess an interest in history is in the blood.)

And the plotting - well, I find plotting hard, so I really admire a facility with it in others. And this book is incredibly tightly plotted. It's very, very clever. I read it on Kindle, but I wish I'd had a proper copy - there were a lot of times when I needed to go back and check what was happening, and that's not easy to do with a Kindle.

It's a powerful, gripping read, and it will certainly take you far away from the lockdown. But I'd advise having a sofa handy. You know, to hide behind.