Something a little bit different for today's post. I volunteer on the SS Great Britain, Brunel's famous ship, permanently moored now in Bristol. It's always full of atmosphere - a little spooky in places - but one weekend earlier in December, it was even more so. And this is the story that resulted. 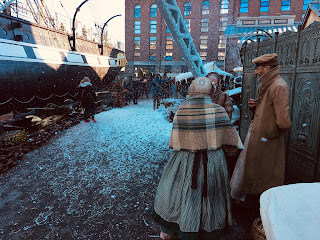 A Gentleman in Moscow, by Amor Towles

A friend recommended this book to me, and I'm so grateful to her! It concerns Count Alexander Rostov, a Russian aristocrat who in 1922 is sentenced to lifelong house arrest - basically for being an aristocrat. He is told he must spend the rest of his life in the Hotel Metropol, where he has hitherto occupied a large and elegant suite. If he leaves and is seen, he will be executed.

From the start it's clear that this charming man has great reserves of resourcefulness, patience and erudition. He assumes he will be returning to his own suite, but finds instead that he has been relegated to a tiny room which has been used only for storage. Quietly accepting, he takes a few essentials from his old rooms, and turns his back on the rest. However, we soon learn that the desk he takes with him has hollow legs, each of which contains a quantity of gold coins. And he manages to break through into the room next door via a cupboard, so that unknown to the casual observer, he now has a bedroom and a study, and there he is quite content.

The staff of the hotel have always liked and respected him, but now he gets to know them much better, and they become friends. But his true salvation is a child called Nina, who also lives in the hotel and knows every nook and cranny of it. She shares her knowledge with him, and although his physical world is now so confined, his mental and emotional world expand.

We are aware, as is the Count, of the tumultuous events outside the Metropol. But somehow, for forty years, the hotel manages to sustain its own life which is almost independent of what is going on outside. The Count meets visitors from other countries and encounters a beautiful actress whose fortunes wax and wane; he also meets a member of the new ruling class, a man called Osip, who tells him he wants to learn from him about the world beyond the borders of Russia - a world in which the Count travelled extensively before his incarceration. They learn about America through watching films, a great favourite being Casablanca (my own all-time favourite, too): and eventually, Osip is able to help him on two occasions when his need is great.

The book has the feel to me of the Russian epics to which the Count often refers. Everything is beautifully observed: the food and wine served in the hotel (the Count, who in later life becomes the Head Waiter and rejoices in this calling, is extremely knowledgeable about both), the way a present is wrapped, the characters themselves. It's enchanting. It moves at quite a slow pace, but speeds up as the years go on - and the ending is a tour de force: breathtakingly clever and quite unexpected.

It's a lovely, lovely book - I strongly recommend it.
Posted by Sue Purkiss at 17:49:00 No comments: