The Lamplighters, by Emma Stonex 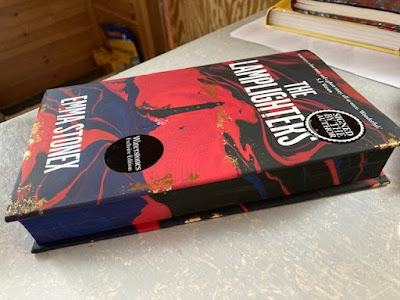 The first thing to be said about this book is that it is very, very beautiful. The photograph doesn't actually do it justice: the cover depicts a lighthouse, surrounded by dark, swirling clouds and seas - rich crimson, ultramarine and black, with a scattering of gold - the colours are much more vivid than in the photo. In my edition, which is said to be a Waterstone's exclusive, the colours bleed over onto the page edges: such drama!

Publishers don't give such luscious treatment to a book unless they really have faith in it - and you can absolutely see why Picador would have had that kind of faith in The Lamplighters. it begins with a rivetting mystery. In December 1972, Jory, the boatman, takes supplies and a relief keeper out to the Maiden Rock Lighthouse, which is on a pinnacle of rock beyond Landsend in Cornwall: isolated and difficult to reach because of wild seas. Normally, the resident keepers would be waiting to help him moor the boat and unload, but today no-one is there, and Jory realises that something is very wrong. He goes to fetch help, and when they eventually manage to get into the lighthouse, they find that all three keepers have disappeared. The table is laid for two, and two clocks have stopped at the same time.

The mystery of what happened to them is never solved, although a possible explanation is eventually given in the book. The story is taken up in 1992, when a writer contacts the women who were left behind by the three keepers, saying he wants to undertake a new investigation. The stories of the three women are interwoven with the stories of the three keepers, and gradually, the complexities of their relationships - and what may have led to the tragedy - are revealed.

It's a very powerful book. The lighthouse itself is at the very centre of things, and it comes as no surprise to find out that Emma Stonex has always been fascinated by lighthouses. She vividly describes the wildness of the sea and the strangeness of the life on this inaccessible place, and her depiction of Arthur, the chief keeper, in particular, is subtle and deep. The book is a kind of memorial to the lighthouses and their keepers, for of course they are all automated now; they're surrounded with an aura of romance and heroism, rather as the lighthouse itself is surrounded by the elements of wind and water.

I felt slightly less satisfied by the supernatural element, which becomes more significant in the later part of the book. It felt as if this was introduced, but the author wasn't certain how much credibility to give it, so it wasn't fully realised. And there were one or two other elements which came in later on which felt similarly not quite right to me - can't really discuss them without giving too much away.

But those quibbles apart, this is a wild and wonderful book - one to read as the night draws in, and preferably with a storm rattling the windows - with maybe a branch tapping against the glass...