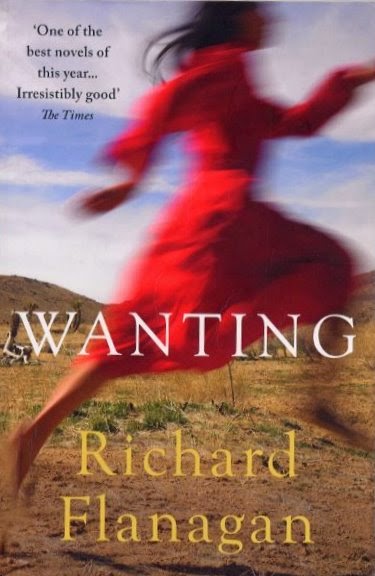 I was given this book for my birthday by my son. I didn’t realise till my husband helpfully pointed it out to me that Richard Flanagan is also the author of A Narrow Road To The Deep North, which has just won the Man Booker prize – and which I had given my son for his birthday back in August.
So, moving swiftly on past this lamentable evidence of my inability to remember titles and authors – let's talk about Wanting.

Set in the late 1830s, Wanting skilfully links two stories which on the face of it should have no meeting point. The first relates to an Aborigine girl called Mathinna (though, prophetically as it turns out, she has been christened ‘Leda’ by the Englishman in charge of the settlement where she lives, on a small island between what is now Tasmania, and Australia). The second concerns Charles Dickens, and the beginning of his affair with Ellen Ternan.

The link is a well-to-do English woman, Lady Jane Franklin. When we meet her, she is trying to
salvage the reputation of her husband, Sir John. He has disappeared while exploring the polar regions, and she is distressed by rumours that the expedition ended in cannibalism. Knowing that Charles Dickens has the ear of the nation, she appeals to him to help her end the rumours and restore her husband’s reputation.

Dickens is unhappy. His beloved daughter Dora has just died, and his marriage has become hollow. He throws himself into writing a play about the expedition, which at first is produced as one of his fêted home entertainments, but which is so successful that he decides to put on a professional version. One of the actresses is Ellen Ternan, and the rest – well, you know the saying.

Flanagan, through a narrative which switches from one story to another, and from one time to another, gradually reveals the story of Mathinna, and how she is the catalyst which eventually brings about the failed expedition. It is a terrible story. It’s not just Mathinna’s story: it’s the story of colonialism and specifically of the destruction of the aboriginal way of life, in which the profound victims are the aborigines, but their oppressors are also ultimately degraded and destroyed.

Wanting is a hard read, because it’s so relentlessly sad. Dickens is deeply unhappy, but so is his wife. Ellen is thrilled by Dickens’ attentions – but we know that the affair will not end happily for her. Mathinna is happy for a short while, but not for long. Lady Jane, unable to have children, takes up Mathinna as an experiment in education. But the child becomes – like Ellen – the object of an obsession. Ellen is many years younger than Dickens, and, dazzled by his celebrity, is arguably exploited by him. But there is no argument at all about Sir John’s abuse of, and subsequent unspeakably cruel destruction of Mathinna as a result of his obsession. Even so, he is not a pantomime villain. Flanagan shows us who and what Sir John is - and there are things to like about him; he shows us human nature in all its disturbing complexity.

From what I’ve heard about A Narrow Road to The North, based on Flanagan’s father’s experiences as a Japanese prisoner of war, that’s an even less comfortable, if at least equally remarkable read. Once, when I was a sixth-former, I went to a conference at Manchester University. One of the talks was about comedy and tragedy. The speaker suggested that  the two forms are just different ways of looking at the human condition. With tragedy, the writer considers the life of the individual – which is ultimately tragic because it ends in death. With comedy, the writer takes a broader view and considers humanity as a whole. It’s a distinction that’s always stayed with me, though I’m not sure how useful it really is: I mention it here because I want to find a way of suggesting that Flanagan’s bleak vision is not the only way of looking at life.

In other words – if you want a happy ending (and I really do like a happy ending!), Flanagan is not the writer for you. But if you are in the mood to think, and to face up to some of the darkest corners of the human soul, then he undoubtedly is.