I was immensely shocked and saddened to hear earlier this week of the death of the writer, Mal Peet. Keeper, published in 2003 by Walker, was his first novel (though he had previously written many children's books for the educational market with his wife, Elspeth Graham).

Keeper won the Branford Boase Award for a debut children's book, and Mal followed it up with Tamar, a book about the Resistance during the Second World War, which scooped the Carnegie. He also wrote what must lay claim to being the definitive novel about growing up in the 50s and early 60s - Life - An Unexploded Diagram; two companion novels to Keeper; and most recently, The Murdstone Trilogy, which I haven't yet read.

But when I heard the news, the book I immediately wanted to turn to was Keeper. It's about a world-class South American goalkeeper, El Gato - The Cat. Now - I don't have a sporting bone in my body. I can't throw, I can't catch, and the only sport where I even understand the rules is tennis. But I do live with people who are quite the reverse - for whom sport is part of the bedrock of their lives - and Keeper is the book that absolutely taps into that vein: for El Gato, and for the people he comes from, football is not a peripheral thing, it's absolutely central.

The story is told as a long interview with a sports journalist, Paul Faustino. El Gato's team has just won the World Cup, and Paul is after an exclusive.

He gets one. But it's not the one he expected. As he sits and listens - in an interview that goes on long into the night - El Gato tells him an extraordinary tale of his childhood in a remote village in the South American jungle, where the only job any man does is logging, and all that awaits the girls is marriage to a logger. El Gato's mother wants him to be more than that - perhaps to be a scientist. El Gato himself (he's not yet been given this nickname) is skinny and useless at football, which is what all the boys his age spend all their spare time playing. But when he gives up even trying to play, time hangs heavy on his hands. He begins to venture into the jungle, just for something to do. And there he finds something extraordinary: a football pitch in a clearing - where someone is waiting for him.

And here I find the words difficult, Paul. I could say that he stepped out of the trees, but that is not quite right. He moved into the clearing, that is true, but he did not seem to be solid until he stopped moving. You know how sometimes you get bad TV reception, and there is a kind of shadow that follows the picture, so that things seem to happen twice? It was a bit like that: I watched him move and saw him standing still at the same time.

This is the Keeper. He sees potential in the boy, and he doesn't just train him - he transforms him. He develops muscle, he grows, and he becomes a superlative goalkeeper. All this is done in secret - how could the boy tell anyone he is being trained by a ghost? But eventually, when he has to leave school and go to work in the logging camp with his father, he finds himself playing in a football game in the camp - and his ability is obvious.

Well, that's the story, or most of it. But it's the way it's told - the writing - which is so extraordinary. The experience of reading it is intense. Paul Faustino is not just a plot device, he's a fully realised character, and we are there, in that office, sharing his incredulity as he listens to El Gato's story - just as we're there in the forest with the boy, listening to the Keeper's advice.

...'When a player shoots at your goal, he will do things which tell you where he wants the ball to go. He will lean slightly to the left or the right to put weight into the shot, and his own weight onto one foot or the other. He will drop one shoulder, and almost always his shot will be in a line with that shoulder. Most players cannot help glancing, for a fraction of a second, at where they intend to send the ball...

I repeat, I know nothing about football. If you do, then this book will probably be even better for you. But if not, it doesn't matter. The drama is in the relationships - between the boy and the Keeper, between El Gato and Faustino, between the boy and the members of his family. The book is about growing up, and learning to know who you are, and respecting the environment. It's about poverty and integrity and loyalty. It's brilliant. It's absolutely focused: there's not a word that's out of place. 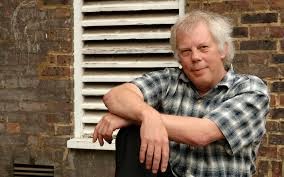 When I'd read it the first time, I was so impressed by it that I wanted to get in touch with Mal and tell him so. I was able to do this because we were both authors with Walker - this was before the days of Facebook and Twitter, so it wasn't quite so easy then as it is now to get in touch with people you didn't know. Also, I'd read that he hadn't been to South America before he wrote the book, and I couldn't believe it - but when he replied, in a friendly, appreciative and self-deprecatory email, he assured me that it was true, though he had been since he wrote it. I only met him once, just briefly, after an event, but he was the same then - friendly, funny, full of smiles.

What an amazing writer, and what an extremely nice man. If you haven't read his books, you have a treat in store. But how very, very sad that there will be no more, and that Mal Peet died too soon.
Posted by Sue Purkiss at 18:52:00