At a place called Cley on the coast of Norfolk the Norfolk Wildlife Trust has a visitor centre. I didn't take a picture of it, and I can't find a good one, so you'll have to take my word for it that the centre looks rather like a beached ship, and fits very beautifully into the landscape. The front wall is mostly windows, and it looks out over the marshes, first freshwater and then salt, which lead to the edge of the land and the sea. There's a lot of sky above you, and a lot of space in front of you. Even if you're not an accomplished birdwatcher; you can't miss the birds.

Like any visitor centre worth its salt (!), Cley has a shop. I homed in on the books, and found a mystery series set in Norfolk and written by Elly Griffiths. I bought the first one, which is called The Crossing Places, and it turned out to be an absolute treat.

It features a forensic archaeologist (someone who specialises in bones), called Ruth Galloway. Ruth lives on the edge of the marshes in a lonely little cottage, and she loves it. She is called in by the local police - in the form of one Harry Nelson - when they find the bones of a child near the site of a prehistoric wooden henge which Ruth played a part in uncovering some years before. Nelson hopes they are the bones of a child who went missing ten years before - he is desperate to give closure to her parents, and haunted by a series of anonymous letters taunting him about his inability to solve the case. However, the bones turn out to be considerably older than that.

Then another child goes missing. Ruth helps Nelson to investigate the case - and finds that she herself is drawn into danger.

The story is good and it's very well told. But it's the characters that are the real draw. There's Ruth, who is fortyish, overweight, clever, independent and funny. There's Nelson, who is tall, handsome, does a good line in dark scowls, and is fiercely loyal to his team and protective of his family, the beautiful Michelle and their two daughters. There's Cathbad the druid, who really does seem to have semi-magical powers, and has a way of being exactly where and when he is needed. There's Cloughie, the detective sergeant, who eats all the time but never puts on weight, and Judy, also a detective sergeant, who's tough but also good at empathy, and vies with Clough for Nelson's approval. There's beautiful Shona, Ruth's friend, feckless and faithless, and there's loathsome Phil, Ruth's ambitious, attention-seeking boss. 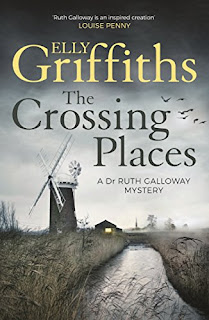 All of these and more reappear in all the books - I think there are nine to date. Their intertwining stories are ongoing, and to appreciate and enjoy them properly it really is best to read the books in order. Each book is set at least partly in a different bit of Norfolk, and the plots don't repeat each other, although some elements do. The characters aren't predictable. Their lives become messy, but just in the way that real lives do. The landscape is described beautifully, and its long history is often integral to the stories.

I've read them all now, except for the last one, which I'm trying to save, like the last bit of chocolate. I meant to stop after a couple and make them last - but it's so fatally easy with a Kindle; your finger hovers over the screen, as you think, 'Well maybe just one more - one more won't really make a difference, will it...? Because I really do need to know whether it's going to work out between X and X, and whether Y is going to happen...'

I really do recommend this series. Elly Griffiths is a seriously good writer, albeit one with a great sense of humour and the ability to observe human nature with forensic accuracy, but also with kindness and understanding.