Today is gorgeously sunny, and it's clear that summer is staging a comeback. But still, there are signs of autumn about. Dusk is dropping earlier, and some mornings the air is cool.

Earlier this week when I took Nessie (dog, not monster) for a walk up on the hill, I looked out for concrete signs that autumn is coming, and here they are.

Beech mast. There are masses of these nuts on the ground in the woods, which will clearly make the squirrels, Nessie's sworn enemies (How dare they diappear up into the trees like that? SO unsporting!) very happy. I wondered if it was just that I haven't noticed them in previous years, but recently read in Isabella Tree's book Wilding that there's such a thing as a 'mast year', when you get bumper crops of nuts and suchlike. So maybe that's what this is. 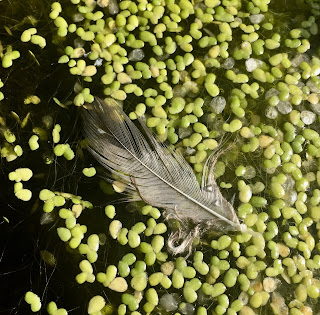 This feather was floating on the surface of a dew pond in the wood - the same one where, a few months ago, thousands of tadpoles gradually turned into tiny frogs, a process that - incredibly - I'd never witnessed before. It's wonderful how you keep learning things. I only found out recently that the reason you don't see many birds about in high summer is that they're hiding away because they're losing their feathers. ( You can imagine the avian protests: "But my dear, I can't possibly go out looking like this!") 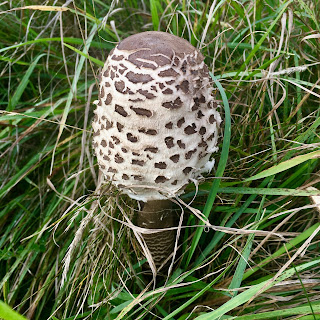 Fungi are starting to appear. If anyone knows what this one is, do say: it was out in the open, on top of the Mendips. I've googled images of fungi - who knew there were so many, and such splendid ones? I was particularly taken by a bright purple one called a Violet Pouch. But I haven't managed to find this one. 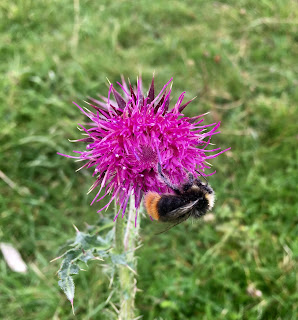 A bee on a thistle. 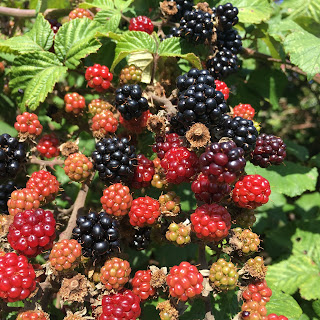 The blackberries in the lane opposite our house started to turn black at the beginning of August this year, and they're much larger and juicier than they usually are. I did cut the brambles back earlier in the year - I don't know if that has anything to do with it. Or perhaps it's to do with that mast year thing again. 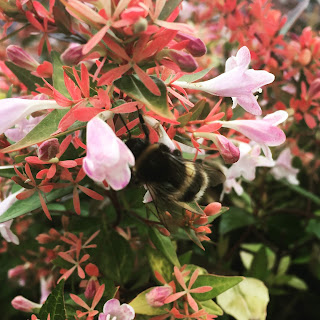 And finally, something from the garden. This is a large abelia bush. It is covered in these pale lilac flowers, which the bees absolutely love. The newest leaves are a foxy, tawney colour which glows in the sun, and it flowers from August right through till late autumn.

The lavender in the garden is almost over now, but the bees still visit it, seeking out the few little bits of goodness that remain before moving on to the abelia next door.
Posted by Sue Purkiss at 08:20:00