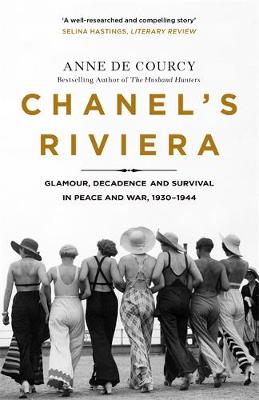 After finishing Overstory, I felt I wanted to read something that was easier, less emotionally demanding. Non-fiction, I thought. And right on cue, up popped an offer for history books for 99p. This one appealed; I remembered seeing an intriguing film about Chanel some years ago; also, this book covers an era that's interested me for quite some time - in fact, I've written two novels set in Europe during the war years. (Don't go looking: neither has so far been published, though I live in hope. Well, you have to, don't you?) I think somewhere else on this blog I've written about Anne Sebba's Les Parisiennes, which deals with the topic of the very different ways in which French women respnded to the exigencies of war. Chanel, I knew, was one of those who found herself a handsome and very useful German lover - no mean feat as she was almost sixty.
The first part of Anne de Courcy's book  deals with the Riviera in the thirties, and it is a delicious look through the keyhole at the lives of the incredibly rich and cosmoplitan group of people who made the south of France their playground and luxurious retreat at this time. Chanel herself had a palatial house built, with no expense spared, where she entertained large house parties; guests and neighbours included Winston Churchill, Somerset Maugham, Scott and Zelda Fitzgerald, Igor Stravinsky, Serge Diaghilev, Edith Wharton - and later the Duke and Duchess of Windsor (who do NOT come across well). So, you know, just the kinds of people you and I have to tea all the time.
Chanel came from a childhood of extreme poverty. When she was twelve, her mother died, and her father abandonned her, leaving her in the care of nuns in a convent, where she was pretty much confined for seven years. (Apparently she later gave differing accounts of her early years, but this much seems to be undisputed.) She then, by virtue of becoming the lover of various wealthy men, opened a milliner's shop, which later became a fashion house; but her main fortune came from the famous perfume, Chanel No. 5 - though it continued to rankle with her for many years that she ad given away too large a percentage to the developers of her perfume, the Wertheimers. She must have been very, very rich: she bought houses for her brothers and supported various people, quite apart from spending money on herself. She had a large collection of jewellery - ropes of pearls of all different sizes: diamond cuffs and bracelets, ruby thises and emerald and sapphire thats. She had, naturally, a large staff, and an apartment in Paris: when she gave that up, she made do with a small flat above her atelier and an apartment at the Ritz.
She was very loyal to her friends, and was seldom without a lover or two. She was capable of great generosity, but also of casual cruelty: she closed her fashion house at the beginning of the war (having paid her staff low wages) without notice, thus depriving her workers of an income just at a time when they would have most needed it. She was anti semitic in general terms, yet she could go out on a limb to try to rescue Jewish friends who had been arrested by the Nazis - by calling on her German lover and associates.
All of this comes in the second part of the book, which deals with the German occupation of France. The contrast is great. The wealthy elite seem to have been so preoccupied with living their gilded lives that most of them simply did not notice what was happening in other parts of Europe - or if they did, they simply shrugged their shoulders, downed another glass of champagne, and assumed that none of it could possibly affect them. The Duke of Windsor, after various people had gone to a lot of trouble to organise a ship to take him to England and safety, refused to come unless the royal family issued a personal invitation, and a promise that he would be fiven all kinds of special attentions. This wasn't forthcoming, so he refused to go - eventually condescending to agree to be driven though Spain to Portugal, with, of course, vast amounts of luggage - while the roads of France were choked with refugees who had fled with only what they could carry.
Anne de Courcy reveals how life was under the occupation for a range of individuals: how things became harder and harder as the Germans commandeered most of the food and imposed increasingly cruel restrictions. She also makes it clear that the appalling treatment of the Jews in the unoccupied zone was largely undertaken by French, not German politicians and police: and she deals with the difficult period after the war, when collaborators were punished - pointing out that almost everyone, to some degree or another, had to collaborate in order to live.
It's very much a book of two halves, both of which are fascinating.
Posted by Sue Purkiss at 06:00:00