The Wild Silence, by Raynor Winn

This book is a sequel to The Salt Path, which I reviewed here. That was the story of how Raynor Winn and her husband Moth, in their fifties, lost everything after a dispute with someone who had been a lifelong friend over investments: they had to walk out of their beloved Welsh farmhouse with virtually nothing. On top of that, Moth was diagnosed with a cruel terminal disease, corticobasal degeneration, or CBD; he had about two years, they were told.

There are many things that emerge from The Salt Path and its successor, The Wild Silence. But one of the main elements is the rock-solid relationship between Raynor and Moth. So when they found themselves in this terrible situation, the one thing Raynor was not going to do was to simply accept the diagnosis and the doctor's advice - which was to avoid all strain and rest as much as possible.

Another element - which is explored even more thoroughly in this second book - is Raynor's profound connection with the land, with nature. Brought up on a farm, shy with other people, nature is her solace and her inspiration. So perhaps it wasn't surprising that she should turn to nature for relief. She suggested that, against all the dictates of caution and common sense, they should take to the wild and walk the South-West Coastal Path - despite the fact that Moth could hardly walk and would have trouble carrying a pack. (In any case, they had so little money to buy food or any other necessities that their packs must have been relatively - but only relatively - light.)

And it worked. They had an extraordinary journey, which resulted not in a miracle cure, but certainly in an improvement in Moth's condition. And at the end of it, a stranger offered them a refuge - a flat in Polruan, where they could live while Moth did a degree in sustainable agriculture, which he hoped would then bring him emploment. 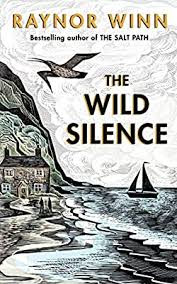 This is where the second book picks up the story.

Often, a sequel is a rather paler version of the book it follows. That is not the case here. It seems to me that Raynor has gained confidence in her writing - not surprisingly, considering the huge success of The Salt Path. She writes absolutely beautifully in this book, and very effectively investigates subtle and complex ideas and emotions - as well, of course, as providing rich and evocative descriptions of nature.

The structure of the book is complex. She is exploring different aspects and periods of her life simultaneously; in the first section she is taking care of her mother, who has been taken to hospital following a stroke. Alongside this we find that she and Moth are still, three years later, in Polruan, and that Moth, despite increasing weakness, is nearing completion of his degree - whereas Raynor has become increasingly reclusive and anxious about meeting people. She has to make a terrible decision about her mother's care, and, staying in her mother's cottage, memories come back to her of her childhood. We begin to see that her current state is rooted in the past, and we find out how she met Moth, and how their relationship developed.

Later, she describes how the writing of The Salt Path came about. In the beginning, she knows nothing about publishing and has no expectations of success - she is writing about their extraordinary journey in order to capture it for Moth, who, to her dismay, is losing his memories of it. But of course it does become a success, and this leads to a new phase of their lives, when a wealthy businessman asks the two of them to take care of a farm he has bought, which is exhausted from intensive farming and almost devoid of wildlife. He wants them to bring it back to life, to re-nature it. At first, they are doubtful: the house is a damp and crumbling wreck, the farm will take a lot of work to enable the land to recover. But, never able to resist a challenge, they take it on.

In the last section of the book, they decide to undertake another ambitious walk: Moth is getting weaker, and they are convinced that what he needs, as before, is to literally and metaphorically stretch himself.

So they go to Iceland, with their friends Dave and Julie, whom they met on their first walk. They only have two weeks, which unfortunately fall at the end of the Icelandic summer and at the beginning of its fierce winter. Crazy? Well, perhaps - but when did that ever stop them?

Here is an example of Raynor's writing. She is describing the process of writing, of reliving, the coastal walk.

I stood in the dim evening light, faced the wall and spread my arms wide and the rain came stinging on gale-force winds, pounding my face, battering the rucksack. Winds roaring through granite-block cliffs, hurling crows through wild grey skies.

The soft rain became vertical rods of connection between land and sky, drops bouncing from the river with the force of a pebble, leaving ripples expanding and reflecting.