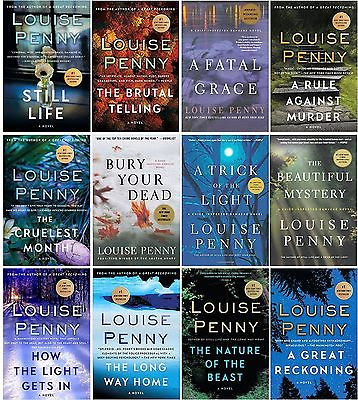 A couple of months ago, a friend put me onto a detective series by a writer I hadn't heard of, Louise Penny. They're set in Canada, she said, in Quebec. I think you'll like them.

Well, sixteen books later, I can confirm that she was absolutely right. (There is a seventeenth, but it's still expensive on Kindle, so I'm trying to exercise a little self-discipline and wait till the price comes down.) I thoroughly enjoyed these books. What's more, they did me good - they were therapeutic.

Well, I find autumn a difficult season. Nothing complicated about that: it's the dark nights, it's the sense that not only is winter coming, but it's going to be hanging around for months and months. As days shorten, so my mood sinks. For this time of year, I need reading which is both engrossing and comforting.

And although these are ostensibly murder mysteries, they are comforting. For the most part, the characters they feature are nice. They're quirky, kind, funny and witty. Take Inspector Gamache himself. He is not your usual star of detective series; he's not miserable, he doesn't have a fatal flaw - he has friends, for heaven's sake, and a happy marriage. He's big, strong, gentle, perceptive and kind - but if you need someone strong and decisive when push comes to shove, he's the one I'd choose over Rebus, Simon Serailler, Albert Campion - even Dr Siri. (Not sure who I'd pick between him and Elly Griffiths' Nelson, though - that would be a close call.)

But he's not the only star of this series. That would be the village of Three Pines, which has a magical quality about it - a touch of the Narnias. For a start, it's not to be found on any map, and it's not discoverable by GPS. It's small, it nestles among fairy-tale forests, and in the winter it snows and is beautiful. It's inhabited by a bunch of eccentric friends. They're not all faultless, not by any means: some of them do bad things. But somehow they're all people you'd love to have as your friends - even Ruth, the crazy old poet who insults everybody and is only nice to her pet duck. Gamache comes across the village on an early case, and eventually ends up living there. Along the way, apart from the murders he has to solve, he encounters corruption in the police force which almost destroys him, terrorism, difficulties with his son; but nothing dents his belief that people are essentially good - indeed, he's known for choosing as colleagues people whom everyone else has given up on: they inevitably come good in the end, and are fiercely loyal to the Chief. 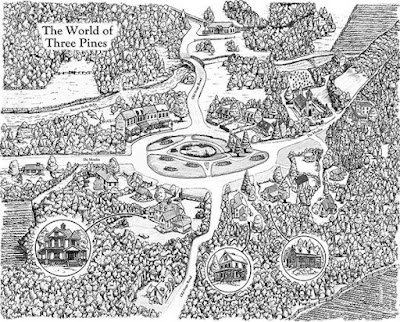 So why are the books so comforting? Well, the belief in kindness and goodness clearly helps. So does the version of winter, which is so much more magical than the dank, damp and dreary variety which we see so much more of. The stories are gripping, and the conversation is funny and sharp - it's as if you're in the company of a bunch of a delightful group of friends, who will always be able to entertain you.

And then there's the food. There is so much wonderful food. The owners of the bistro and guesthouse, Gabri and Olivier (I think that's his name, but may be wrong) produce the most delicious snacks and meals at the drop of a hat, but they're not the only ones; everyone seems to have their own speciality, except Ruth, who simply helps herself to what everyone else cooks. There are croissants, and brownies, and masses of maple syrup, and sandwiches with the most gorgeous fillings, and spicy soups - well. Who wouldn't want to live in Three Pines, despite the high incidence of murder?

If you haven't been there yet, do drop in. See you in the bistro.