Hour of the Bees, by Lindsey Eagar

This is the second of the books I've read recently which has a magical tree at its centre - the first was The Lie Tree, which I've written about below.

They do have some other things in common. The viewpoint character in both is a girl of about twelve - not quite a teenager. Both books deal with problematic relationships between parents and children. But they come from, and contain, very different worlds

. Whereas The Lie Tree is set in the claustrophobic world of Victorian society, Hour of the Bees takes place in the empty landscape of an American desert. In some ways it's a mythic story that is outside time - but Carol and her family are firmly rooted in 21st century America. 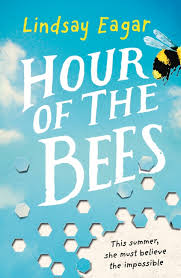 At the beginning of the book, Carol, her parents, her small brother Lu and her teenage half-sister Alta have arrived at the drought-ridden ranch of Serge, Carol's grandfather. Serge and her father, Raoul, have not spoken for twelve years, since the death of Serge's wife Rosa; but now he has dementia, and Raoul has arranged for him to be moved to a 'facility', a fancy place called Seville, which must be paid for by the sale of Serge's dearly loved ranch.

At first, it reads like a familiar story of a family at odds; Alta is splendidly moody, Carol wants to be at home with her school friends considering such vital problems as what sort of school bag they should all buy, Carol's mum is exhausted with the demands of work, children and doing the right thing by Serge.

But then it turns into something much more interesting. There are bees, which are mysteriously attracted to Carol, which no-one else can see - but in which Serge is keenly interested. Serge insists on calling Carol by her Spanish name, Carolina, and tells her how much she reminds him of Rosa. And he begins to tell her a story about a tree - a completely extraordinary tree. At first, Carol thinks the story is just that - a story. But then she begins to notice things. Ines, the dog, is older than any dog could possibly be. The heroine of the story is called Rosa. And though there is no longer a lake on the ranch - because, says Serge, the bees carried it away, drop by drop - there is the stump of a tree.

It seems impossible that the tragedy which is gradually revealed can possibly be sorted out within the compass of the book. But trust me - the ending will have you cheering from your armchair, while at the same time wiping away the tears.

I can't think of any other magical realist books for children, though I'm sure there must be some - but this sits firmly within the Spanish American area of that tradition. It's unusual, and really rather special.
Posted by Sue Purkiss at 14:14:00