The House by the Lake, by Thomas Harding

Thomas Harding's grandparents were originally called Hirschowitz, and they were Jews who managed to escape from Hitler's Germany just before escape pretty much ceased to be an option. They were relatively fortunate; most of their family got out too. When they came to England, Erich refused to speak a word of German from that day on. For the rest of their lives, they didn't buy German cars, they didn't go on holiday in Germany, their children did not learn German, and they did not speak of the Germany they had known in the years before the war. Only Elsie, Thomas's grandmother, sometimes spoke of it; and particularly, she would tell him about a wooden house on the shore of a lake just outside Berlin, called the Lake House. It was the summer holiday home of her family, the Alexanders, and she spoke of it with longing. It was, she said, her 'soul place'. But when boundaries all over Europe were drawn after the war, the Lake House found itself in East Germany; the Wall ran across the edge of the lake, separating the house from its lakeside frontage. Even if the family had wanted to go back, it was no longer possible.

But after the wall fell, Elsie decided she was going to go back. In 1993, she took with her six of her grandchildren, including Thomas, then 25. She showed them Berlin, and, a vision in black mink and scarlet lipstick, she took them to the Lake House and introduced herself to a bemused Wolfgang, the current tenant, rather less elegant in workman's overalls and a woolly hat. She assured him she hadn't come to reclaim the house (which of course had been appropriated from her family by the Nazis), and then she looked round, eager to see the old house she remembered, still discernible beneath the changes that had been made in the nearly sixty years since she had left. 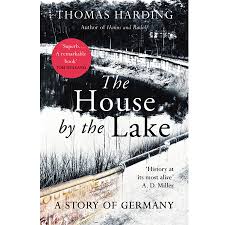 Twenty years later, in 2013, Thomas decided he wanted to know more about his family's German past. He decided to go back to the Lake House. By now it was empty and it had deteriorated considerably. But he felt himself drawn to it. Why had it been his grandmother's 'soul place'? What had happened to it in the years after the Alexanders left - who had lived there?

As he sought the answers to these questions by tracing the history of the house, he found that he was also mapping the history of Germany in the twentieth century. In broad terms, most of us will know this history. But the book takes us into the lives of the people who lived it - from the aristocratic Wollank family which originally owned the estate on which the house stood, to the Alexanders who built the house and were then forced to abandon it, to Wilhelm Meisel, who became a tenant in slightly murky circumstances and was in turn affected when the communists took charge, to Ella Fuhrmann who was allowed to live in part of it as a caretaker, to Wolfgang Kuhne, who was allotted space in the house by the authorities and lived there for most of his adult years. Finally, it was abandoned to squatters, until the council stepped in and boarded it up.


It's at this stage that Thomas Harding revisits the house. And as he learns more about it, he becomes convinced that he wants to save it. So really, there are two narratives; the main one concerning the story of the house itself, and the secondary one concerning his mission to rescue it from redevelopment.

It's a fascinating and very readable story. It covers so much: how did Germany sink into the madness of the Nazi era? What was it like at the end of the war, when the Russians advanced? There have been excellent studies of what happened in Berlin, but I haven't read much about what it was like for civilians outside the big cities. How was it to live in the shadow of the wall? What happened if you were asked to become a Stasi informant and you refused? All these questions and far more are covered in the book.

And I'm fascinated by how Harding managed to find out so much, just between 2013 and now - and to convert it into this engrossing narrative, Sure, he had a researcher - but even so! I hope he'll be giving a talk at a festival near me some time soon...