First of all, an apology: I read this book some weeks ago. I always intend my thoughts down straight away, but what usually happens is that I pick up the next book - and the next - and get involved in that, and so it goes. Then, by the time I get round to a review, I've forgotten the details and can only do a broad-brush review. Still, on we go! 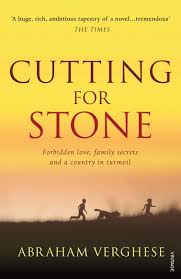 This book is set in Ethiopia. It's big - 533 pages - and it's big also in ambition and sweep. At the centre of it is a family story. In the year 1954, twin boys, Marion and Shiva, are born to a Carmelite nun, Sister Mary Joseph Praise, in the hospital where she is a nurse, in Addis Ababa. It is a highly unusual birth: firstly, because she is a nun; secondly, because no-one had realised she was pregnant; thirdly, because the father, a brilliant surgeon named Thomas Stone, had absolutely no idea that he had even slept with Sister Mary. He loves her, but he doesn't realise it till he realises he is about to lose her - she doesn't survive the birth. Distraught, he disappears, so the twins are affectively orphans.

However, they are brought up by loving stand-in parents: Hema and Ghosh, both doctors at the hospital. Characterisation is one of the many strong points of the novel: there's a whole cavalcade of beautifully realised characters, eccentric, strong-willed, generous, funny - and these two head the procession.

Not unnaturally, living at a hospital and born of two medical people, the twins also become devoted to medecine. Marion narrates the book, and is a very different character from his brother, who has something other-worldly and mystical about him: Marion is hard-working and practical - though he too has his dreams.

Underlying the family story, though, there are two other preoccupations. One is medecine. Born and brought up in Ethiopia of Indian parents, Abraham Verghese is an eminent American physician, and he writes at considerable length in this book about surgical procedures and new ideas in treatments. I must admit I skimmed some of these - but he writes beautifully about them, and I am lost in admiration for someone who can at the same time have eminent careers as both a devoted physician and a brilliant writer.

The other story he tells is about Ethiopia. Many years ago I flew with Ethiopian Airlines to Tanzania, changing planes in Addis, and I remember looking at the flight attendants and thinking what stunningly beautiful people they were. I know Ethiopia produces outstanding long-distance runners, and I've wondered sometimes why Rastafarians revere Haile Selassie, the former president of Ethiopia - but that, until recently, was pretty much the sum of my knowledge about it. This book told me a great deal more, and by one of those serendipitous moments, there was a recent documentary on BBC4 which added to the picture.

Altogether, a tremendous, absorbing read, with the added extra that it took me to places of which I knew very little.