It was announced that Hamnet had won the Women's Prize for Fiction just after I had finished reading it. I haven't read any of the other books on the shortlist, but nonetheless, I'm sure that it's an absolutely worthy winner - it's a marvellous book. 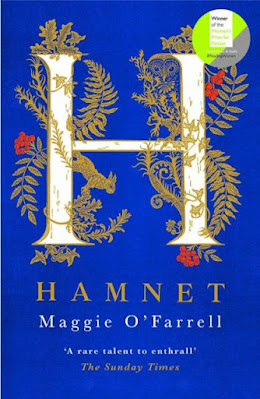 I actually bought the book a month or so ago, but it took a while before I could bring myself to read it. Why so? Well, Hamlet is my favourite Shakespeare play by quite a margin. I taught it for A-level many times, and I've seen several productions, so I know it well. (The best was with Kenneth Branagh as the prince many years ago at Stratford; he managed to speak the verse as if it was the natural language of speech, while at the same time losing none of the poetry - quite brilliant.) There are many lines in it that I love, but there's something about the overall tone of it that really moves me: elegiac, desperately sad.

When I was teaching Shakespeare, I had some notes that I'd written about Shakespeare's life and times which I used to give out as an introduction: it seemed to me that students needed to know where Shakespeare was coming from - literally and metaphorically - in order to be able to understand the verse. So I knew about his life: I knew about Hamnet, his son.

Then, a few years ago, I was asked to write a book about his life and times for schoolchildren, so I read up on it again. I was amazed at how few actual facts are known about him - even the generally accepted dates given for his life and death are, to an extent, guesswork. But the death of his son at the age of eleven is known, though not the cause of his death. And I noticed, as who could not, that his death was followed not long afterwards by the play with the very similar name; spelling was notoriously a matter of choice, and the similarity was too close to be missed - though the play is based on an old story of a Danish prince with a similar name again, Amleth.

At the centre, it's about the strange marriage of Shakespeare and his wife, normally known to us as Anne Hathaway, though here called Agnes - perhaps to make us see her afresh. Again, little is known about Anne or about their marriage: mainly that she was several years older than him; that they spent much of their married life apart, he in London and she in Stratford; that they had three children, Susannah and the twins, Hamnet and Judith; and that in his will he left her his 'second-best bed', which has occasioned some discussion.

So Maggie O'Farrell has a lot of leeway. She uses it to create in Agnes a rich, complex character: an unusual woman with a knowledge of medicinal herbs and a mysterious ability to see the future. She and Will - who is never actually named in the book - are very much in love. But she knows, though it hurts her deeply, that his destiny is in London, not in Stratford.

We meet Hamnet straight away. Initially, it is his sister, Judith, who is ill. But with our foreknowledge, we can see that what ails her is the plague, and we know that Hamnet is the one who dies - so even as we warm to this kind and gentle boy, we know that he doesn't have long left. He searches for someone to help his sister, but can't find his mother - the only person around is his abusive grandfather.

The focus then switches to Agnes, who is out gathering herbs. We learn through flashbacks the story of her relationship with Will, touching down from time to time with Hamnet and Judith back in Stratford. It's heartbreaking and rivetting. When Hamnet dies, and Will returns, she cannot believe it when he tells her he will return almost straight away to London: she is understandably furious with him. The way that Maggie O'Farrell resolves this, through the medium of the play, Hamlet, is a quite extraordinary piece of writing.

I'll read this book again. It is quite beautiful.